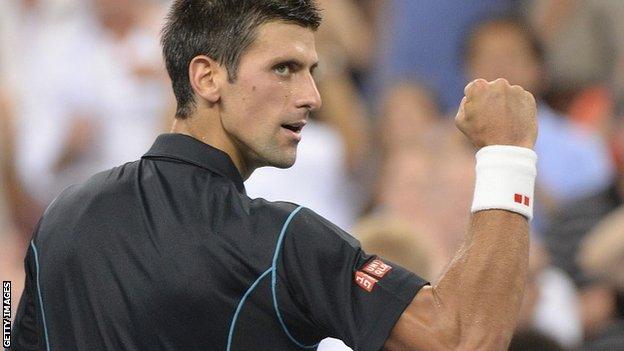 World number one Novak Djokovic raced into the US Open fourth round with a comprehensive 6-0 6-2 6-2 win over Portuguese world number 95 Joao Sousa.

The 2011 champion completed his victory in an hour and 40 minutes and will face Spain's Marcel Granollers next.

Djokovic broke eight times and hit 34 winners in his relatively brief time on court. Sousa broke the Serb's serve in the penultimate game of the match before losing the next to love to seal his fate.

Djokovic is aiming to make the final for the fourth successive year after defeats by Rafael Nadal and Andy Murray either side of his 2011 success.

The 26-year-old has also made the semi-finals of the last 13 Grand Slam tournaments since a defeat by Jurgen Melzer in the quarter-finals of the 2010 French Open.

Li Na said that her 57-minute win over former world number one Jelena Jankovic was "maybe the best match of my whole life".

The Chinese world number six said that her performance was motivated by the pain of losing to the same opponent on the clay in Rome earlier this year.

The 31-year-old will take on Makarova in the quarter-finals.

Stanislas Wawrinka has won six of his previous 11 meetings with last-16 opponent Berdych, including victory over the Czech in their most recent meeting in Madrid earlier this year.

"He's not really happy to play against me. He doesn't like my game," said Wawrinka when asked about his prospects against Berdych.

Suarez Navarro becomes the first Spanish woman to make the quarter-finals of the US Open since Arantxa Sanchez-Vicario in 1998.

Her victory is also likely to mark a wait of almost 10 years for a Spaniard to return to the top 15 of the women's game when the rankings are revised at the end of the tournament.

Conchita Martinez was the last of Suarez Navarro's compatriots to be in that elite group, dropping out in October 2003.

Mikhail Youzhny won a battle between two of the nine over-30 players to make the third round and he will play another, Lleyton Hewitt, in the fourth round.

Roger Federer, David Ferrer and Tommy Robredo are the other three players out of their twenties to make the last 16.

Radwanska had looked in solid form in the run-up to the US Open, reaching the semi-finals of the Rogers Cup in Toronto and finishing as runner-up at the Bank of the West Classic in Stanford, but she was well beaten by Makarova, who had not won a set against the Pole in their previous three matches.

Makarova's match against Li will be her third appearance in a Grand Slam quarter-final after reaching the same stage at the Australian Open this year and last.

"I think she was a little bit nervous in the beginning and then start to play better and better and hit the ball very well," said Radwanska.

Berdych, who is still yet to drop a set at Flushing Meadows, stayed on course for a quarter-final meeting with Andy Murray as he disposed of Benneteau in an hour and 54 minutes.

Hewitt, the 2001 champion, is into the fourth round at Flushing Meadows for the first time since 2006 after following up his win over sixth seed Juan Martin del Potro in the previous round with victory over Evgeny Donskoy.

Wildcard Tim Smyczek's defeat means that there are no United States players in the last 16 of the men's singles for the first time in the tournament's 132-year history.

It is also the first time that there have been no American men in the fourth round of any of the four Grand Slam events after similar failures at the Australian Open, the French Open and Wimbledon.

"We can't wait for it," said Marray, who teamed up with Freddie Nielsen to beat the Bryans on the way to

"Not many people get that opportunity to play there, especially against the Bryans. We're just looking forward to it.

"It can do nothing but give me some confidence knowing that I've been in a big match with them at a Grand Slam and come through with a win. I'm sure it will be a great occasion for both of us."

Fleming added: "Hopefully we can ruin their dream year - that's obviously our aim. But all credit to them, they're obviously an amazing team.

"I've always said playing in a great atmosphere, even if the crowd is against you, is better than playing in no atmosphere."

Jamie Murray and Australian John Peers saved a match point in the second set on their way to a dramatic win on Court 17, securing a Grand Slam quarter-final spot for the first time.

Lleyton Hewitt gets to grips with the training regime that has delivered 17 Grand Slam titles for Roger Federer. "I was surprised that Roger was here Monday morning and wanted to hit at 1000. We hit for two hours, then another two hours in the afternoon.

"It was funny, we didn't do any points at all. We just did drills for four hours."

Tim Smyczek was briefly the focus of attention at Flushing Meadows as the last American man standing. "I never heard somebody yell out from the stands, 'You're our last hope!'" he said. "That was new. But it really happened pretty fast because those other guys just lost yesterday, so..."

Novak Djokovic charms the press and the fast-fingered typist taking down a transcript of the media conference. "Most of the players most of the time when they come in, they don't even notice these great people here who are working very hard to catch every word that I am saying.

"And as I am speaking, he was typing exactly what I am saying. Wow, wow, wow, wow."

Serena Williams reveals that she is sticking pretty close to the vegan diet that her sister Venus is on to manage Sjogren's Syndrome, a problem with the body's immune system. "I never really ate beef anyway. I never ate beef since the 90s, or I haven't eaten pork in basically in my whole life."