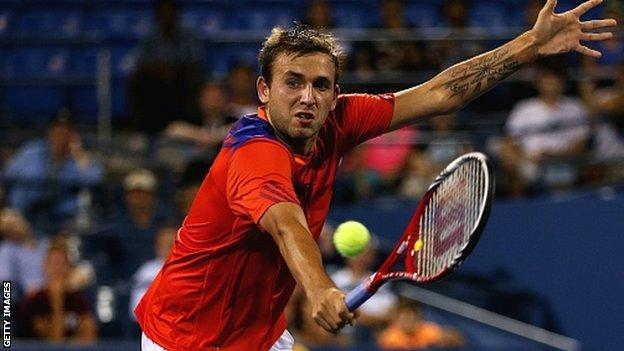 British number three Dan Evans believes he belongs with the top players after his unexpected run to the third round of the US Open.

He will move up from his current ranking of 179 after the tournament and has targeted a top-100 place and direct entry into next year's Grand Slam events.

This year's US Open was the first Grand Slam tournament in which Evans played a main draw away from Wimbledon, where he has twice been given wild cards.

Until now he has spent most of his career on the lesser Futures and Challenger tours.

"To be in the main draw of the Australian Open and Wimbledon would be the icing on the cake," he said.

"To not have to ask for a wild card would help a lot and free one up for one of the other guys."

He added: "To win two matches [in New York] and then have that match shows I'm not a Futures player. I'm probably better than a Challenger player as well."

Evans earned £60,000 for his efforts at Flushing Meadows and signed up to a leading management agency as he shared the domestic headlines with reigning US Open champion Andy Murray.

The pair will head to Croatia as part of the Great Britain Davis Cup team on 13 September, with Evans in pole position to take the second singles spot.

"I've not played a great deal on clay but I'm sure I'll be OK," said Evans.

"I was sure the match was heading to a fifth set but Dan Evans just tightened up. After missing those set points in the fourth, he started rushing a bit, showed his inexperience and made a couple of bad shot choices.

"It is such a shame for him, but once he gets over the disappointment there is no doubt that there are so many positives. It looks like his career is going to go to another level after this tournament."

"With a lot of support on the bench, we've got a very good chance of winning that match. I think I'll play but it's not my decision. It would be a bold captain not to pick me."

Evans looked on course to force a fifth set against Robredo when he served at 5-4, 40-15, in the fourth, but a double fault and a wild forehand allowed the Spaniard back into the set.

"I'm not that disappointed, to be honest," said Evans. "He sort of out-experienced me in the end, I just rushed a bit.

"Up 40-15, I felt like I was going to win the match, and then the momentum turned a bit and it sort of ran away from me. I didn't feel tight at all. I just missed an easy ball."

Evans will discuss his schedule for the rest of the year with LTA head of men's tennis and Davis Cup captain Leon Smith as they plot a path to collecting the ranking points he requires to reach the top 100.

"It's great experience," he said of his New York effort. "It's a good stepping stone but I'm not where I want to be yet, I'm not inside the top 100, so I've got some work to do."

And Evans is already aware that his exploits will make him a marked man as and when he returns to the low-profile Challenger circuit.

"It's something I'm going to have to deal with," he said. "It's not going to be me being the underdog quite so much any more in Challengers, I'll be favourite quite a lot to win matches."