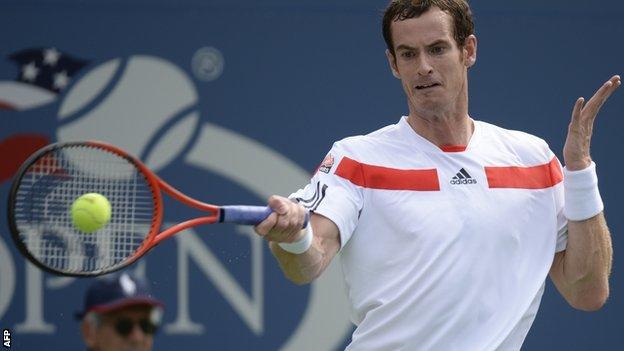 Defending champion Andy Murray saw off Germany's Florian Mayer in straight sets on a steamy New York afternoon to reach the last 16 of the US Open.

He moves into the fourth round for the sixth time and will face Uzbekistan's Denis Istomin on Tuesday.

"It was very, very humid. I was struggling with my breathing for most of the match," said Murray.

"It was a workmanlike performance from Andy and the last two sets were very impressive. He stepped up the gears, hit the ball well, moved well and had excellent concentration."

"With the way that he plays, it was a tough match, especially the beginning.

"But I started the second set well, started hitting the ball a little bit cleaner, was more aggressive after that and finished it well."

If the match time of one hour and 59 minutes was not unusually punishing, the conditions on Arthur Ashe Stadium certainly were, and the Briton was soon drenched in sweat.

The uncomfortable tone was set in the opening game as three break points went begging for Murray amid a flurry of challenges and overrules.

With his own first-serve percentage hovering around the 30% mark and an average speed of little over 110mph, the Scot was unable to stamp his authority on the contest.

There were several unhappy glances at coach Ivan Lendl in the stands but the unorthodox Mayer, with an exaggerated forehand preparation and leaping backhand style, could not take advantage of his misfiring opponent.

The world number 47 was made to pay in the tie-break when Murray broke on the first point and hit an ace on the second, providing him with the springboard to take a grip at 4-0.

A blistering forehand winner at 5-1 put the Wimbledon champion in position to claim the set after 54 minutes, and the hard work of establishing control was seemingly done.

Murray opened his shoulders and unloaded on a couple of terrific backhand return winners on his way to breaking at the start of the second as his game began to come together.

The Labor Day weekend crowd was steadily building but remained some way short of the 23,000 capacity as Murray eased away from Mayer, breaking once again to take the second set and hammering a forehand return to go 3-1 up in the third.

There was a break point to fend off at 4-2 but little sense of alarm, and the champion wrapped things up with his seventh break of the day to keep his title defence firmly on track.

Murray does much of his training in the Florida heat but said that had not helped a great deal on Sunday.

"You can get used to something, and then if you aren't in those conditions for five weeks or four weeks - it's been four-and-a-half weeks since I've been in Miami - that doesn't always just stay with you," he said.

"Suddenly it's extremely humid and you're playing right in the heat of the day. That takes time to get used to."