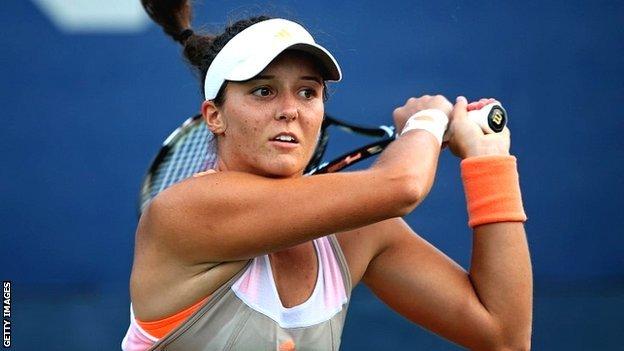 Laura Robson will hope for a repeat of last year's shock US Open third-round win over Li Na when the pair meet at Flushing Meadows on Friday.

The British number one faces China's fifth seed in the first match on Arthur Ashe Stadium at around 16:00 BST, with a place in the last 16 at stake.

Andy Murray resumes his title defence against Leonardo Mayer of Argentina in the second round.

He plays in Friday's third match on Louis Armstrong at around 20:00 BST.

The had to wait until the day three night session to play his first match, and only completed his at close to midnight on Wednesday.

"I just want to get my matches obviously on at the right times," said the 26-year-old Scot, who is seeded third.

Mayer was born on the same day as Murray - 15 May, 1987 - and despite failing to achieve a similar stature in the game, the world number 81 could pose some problems for the

The pair have met once before, with Murray winning over three sets indoors at the 2009 Valencia Open.

"He's a very talented player," said the Briton. "He's got big sort of long, looping strokes. I think he plays his best tennis on the hard courts.

"I played him once before in Valencia. He's a good player. I think he's had quite a few injuries the last couple of years and that's why he hasn't got much higher in the rankings. But he's very tough."

Robson, 19, is on course to match last year's that really catapulted her into the group of players capable of threatening in the latter stages of Grand Slams.

"I remember being so nervous when I walked on court," recalled Robson. "Just fighting through that and sticking with her.

"I think she made a lot of mistakes in the first set, which helped quite a lot. Hopefully she'll do that again."

"After last year I think both players improved a lot," she said. "I am really looking forward to playing against her. I can prove to myself after one year whether I can do better than last year."