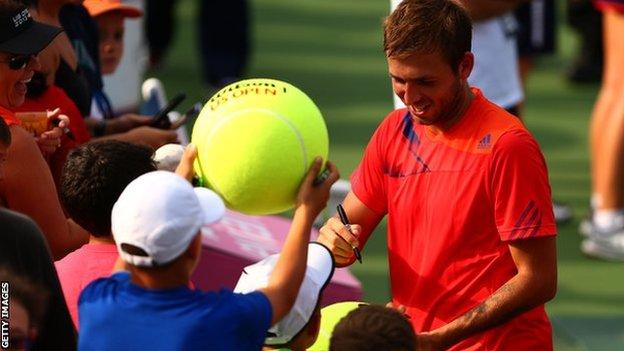 Dan Evans took extra satisfaction from beating Bernard Tomic at the US Open after once being told he was not good enough to practise with the Australian.

And Evans recalled how Tomic's father, John, said in Miami last year that his son would not practise with him.

"I was there playing qualifiers," said Evans, 23. "His dad said I wasn't good enough to practise with him."

He added: "We went to practise, it was all booked, I got to the practice hut. His dad said: 'No, no, he's a qualifier, I'm not hitting with you'.

"So it was one of those. A bit embarrassing, but hey."

Evans has known Bernard Tomic since junior days and said: "I don't think it was his doing. He wasn't there."

The 20-year-old Australian could do little to contain a rampant Evans after the first set on Thursday, and the man from Birmingham said afterwards it was the best win of his career.

A fourth-round meeting with Roger Federer is a tantalising prospect, but Evans' next opponent will take a lot of wearing down first. Tommy Robredo recovered from two-sets-to-love down three times in a row at this year's French Open.

"That's probably the best I've had to fight back," said the world number 179. "In the Davis Cup, I've always been pretty much up when I've won the matches."

Evans has guaranteed himself £60,000 for reaching the third round of a Grand Slam for the first time, and he will next face Spanish 19th seed Tommy Robredo.

The Briton's rapid ascent in recent months was given a stamp of approval by Roger Federer on Wednesday, when the five-time US Open champion chose to practise with him. They could yet meet for real in the fourth round.

"It was amazing to hit with someone so good," said Evans. "I really enjoyed it, actually had a really good hit.

"It was a very good experience. He's a nice guy, was interested in what I did. It was good."

And Evans admitted that the only downside to his victory on Thursday was the fact that he needed his nipples taped at one stage, in full view of the watching world.

"I don't know what it was, it was just agony," he said. "The stick I'm going to get back home is devastating."

Tomic, ranked 52nd, said he knew the match would be a test after Evans beat 11th seed Kei Nishikori in the first round.

"He's playing well for the first time. This is his best result. He played very well against Kei. I knew if he beat Kei it was going to be difficult.

"I think I started well but just lost the concentration, lost my energy level. I couldn't execute my shots, go after my shots, and from then he took over."