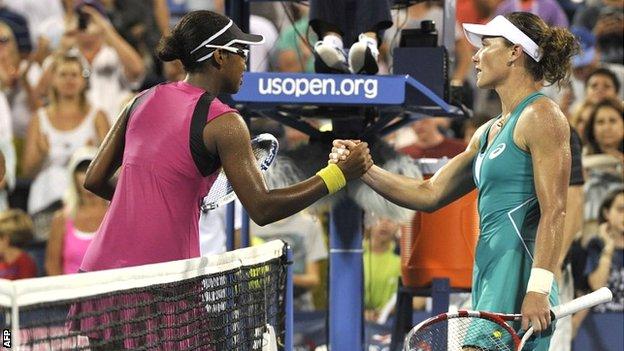 Former champion Sam Stosur became the most high-profile casualty of the US Open first round with a shock defeat by American teenager Victoria Duval.

Caroline Wozniacki and Petra Kvitova also booked their places in round two.

"I like big matches on the big stadium, but the people - it's too much crowds for myself, I think," said Kvitova, the 2011 Wimbledon champion.

Former world number one Woznicaki, whose boyfriend Rory McIlroy was in the crowd in support, won the first set in 35 minutes and recovered from 5-2 down in the second set.

Federer, the 17-time Grand Slam champion whose seeding of seventh is his lowest since 2002, hit 12 aces and 35 winners in beating Zemlja. The 32-year-old looked untroubled by a recent back injury in a 93-minute win.

Djokovic started his quest for a fourth consecutive US Open final by seeing off 112th-ranked Berankis with the help of 10 aces and 28 winners.

"I managed to make a lot of breaks at the beginning and take over control," said the top seed. "That's what I wanted to do. I wanted to play every point like it's match point and I'm happy with the performance."

Any hopes of a more competitive encounter in the second night-session match were dashed as last year's runner-up Azarenka demolished her German opponent in an hour and five minutes.

Duval's only previous Grand Slam appearance came as a wildcard at the 2012 US Open, where she lost to Kim Clijsters in the first round, and she came through qualifying to reach the main draw this time round.

The daughter of Haitian parents and ranked 296th in the world, Duval claimed her first win against a top-20 player in two hours and 39 minutes.

"I know she didn't play her best today, and this is the best I've played in my career, so I'm really excited,'' said Duval.

Stosur, who made 56 unforced errors to her opponent's 35, said: "I let every single opportunity slip away and made too many errors - it really cost me. I'm not going to be a sore loser and say she didn't do anything but I certainly helped her out there, that's for sure."

Canada's Milos Raonic holds the record for the fastest serve at the US Open so far this year with 145mph. American John Isner is second with 141mph.

Former world number one Ivanovic said: "I really want to get back to the top of the game. I believe I have qualities to do so. Once you're at the top, you don't really feel satisfied with being in the top 15."

Isner, America's number one and the 13th seed, hit 16 aces and had an average first serve speed of 128mph as he beat Volandri in just 76 minutes.

During his defeat by 247th-ranked qualifier Maximo Gonzalez, Jerzy Janowicz smashed two balls into the stands in anger, hit one serve underhand, threw his racket and argued with the chair umpire

Janowicz, 22, who reached the semi-finals of Wimbledon this year, struggled with a back injury that forced him to seek assistance from the trainer during the second set.

Highly-rated Dimitrov has not lived up to expectations at this year's Grand Slams, with one third-round, one second-round and two first-round exits.

"I can put myself in that position. If I play well, I can get very close, if not do it. It's still a long way to go, a very long way." Milos Raonic fancies his chances of lifting a first Grand Slam title.

"Clearly, when you win everything it's fun. You like winning, being on the front page, lifting trophies, doing comfortable press conferences. But that doesn't mean you really, actually love it, love it. That maybe shines through more in times when you don't play that well. For me, I know - winning or losing, practice court or match court - that I love it.'' Roger Federer feels you need more than success to be a happy tennis player.

"It was like someone puts a knife through your lower back." Number 14 seed Jerzy Janowicz described the back problem he received treatment for during a show defeat by 247th-ranked qualifier Maximo Gonzalez.