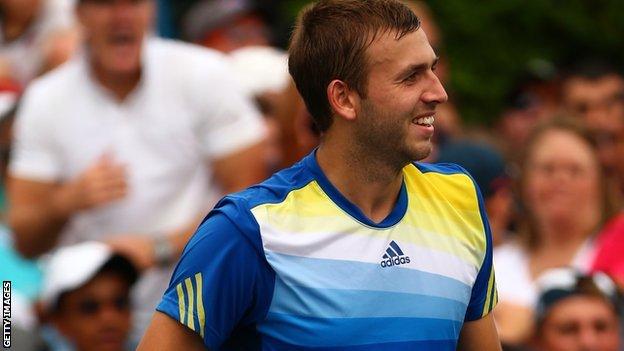 British number three Dan Evans says he will not repeat the mistakes that caused him to have his funding cut for a second time last year.

The world-ranked 179th player had the biggest win of his career when he beat 11th seed Kei Nishikori in the first round of the US Open on Monday having come through qualifying.

Evans, 23, admitted he had been wasting his talent by not working hard enough.

"I've calmed down a bit and matured," he told BBC Sport.

The Lawn Tennis Association cut Evans's funding in 2012 because it said he had shown a bad attitude and lacked commitment.

"There is a reason why I'm getting these results and I have to keep doing what I have been doing to get those results," Evans added.

"I wouldn't make those mistakes again."

The £34,000 prize money which he is now guaranteed for reaching the second round is three times more than the total he earned in 2012.

While Andy Murray was winning the 2012 US Open to end Britain's 76-year wait for a men's Grand Slam singles title, Evans was playing on the lowest rung of professional tennis in Futures events, unable to afford to travel outside Britain and Ireland.

Evans is grateful that his father agreed to support him financially and he says he has knuckled down since basing himself at the LTA's National Tennis Centre at Roehampton.

The LTA has also supplied a coach and fitness trainer to accompany him on tour.

His breakthrough came when he won the deciding rubber as Britain clinched a 3-2 victory in the Davis Cup match with Russia in April.

After reaching two finals at second-tier Challenger events in the United States this summer, Evans was the first British player for seven years to come through three qualifying rounds at the US Open.

From sinner to saint?

"Evans has twice had his funding withdrawn by the Lawn Tennis Association as frustration about his attitude and lack of commitment came to a head, but things look to be changing. 'Every saint has a past, and every sinner has a future,' is the Oscar Wilde quote tattooed on his arm."

Read the rest of Russell's column

And he became the first Briton apart from Murray, Tim Henman and Greg Rusedski in the past 20 years to beat a top-15 opponent at a Grand Slam when he beat Japan's Nishikori in straight sets, 6-4 6-4 6-2.

He plays Australia's Bernard Tomic in the second round on Thursday.

Evans added: "This just shows the younger boys, it can go pretty quick if you get your stuff together.

Evans, from Birmingham, is receiving plenty of support from his family back home.

His sister, Laura Kitching, told 5 Live Breakfast: "He face-timed us yesterday evening and he was really pleased with his performance, but at the same time he's staying grounded at the moment, knowing he has a good match ahead of him on Thursday.

"But he was really pleased with his performance and I think he had to tell me to calm down once or twice because we were screaming and shouting to him. It was lovely.

"Twelve months ago, he wasn't as receptive as he is now. He likes to talk to us all about tennis now - he wants the feedback and everything is done on much more of a positive note now."