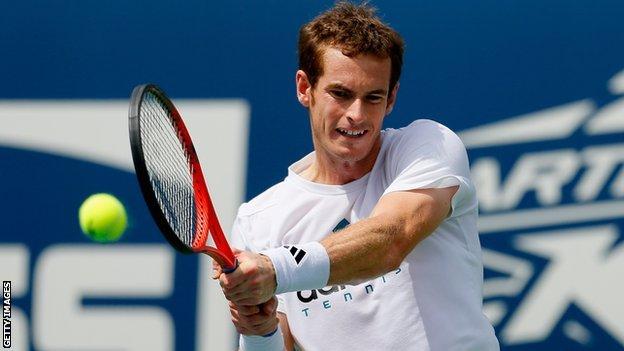 Two men carry British hopes into the singles of the final Grand Slam of the season, the US Open. They are only three years apart in age, but nearly £19m apart in career earnings.

Andy Murray has two Grand Slam titles, and had to spend a couple of days hiding away from the paparazzi before taking a well-deserved break in the Bahamas to celebrate his Wimbledon triumph.

Dan Evans's Wimbledon experience was a little different - he lost in the first round of qualifying before flying out to the resort of Portoroz in south-western Slovenia to try again at an event on the Challenger Tour.

Here in New York, Murray has been very much in demand - appearing on the This Morning programme on CBS, and having a hit in front of the cameras with children affected by last October's Hurricane Sandy - while Evans started last week as one of 128 hopefuls fighting for 16 spots in the main draw.

But as the serious business gets under way, both now have a compelling story to tell.

Murray is extremely unlikely to catch either Novak Djokovic or Rafael Nadal in the world rankings before the end of the year, but having won two and reached the final of the other Grand Slam he has contested in the past 12 months, he has proven his class at the ultimate level.

The biggest lesson of this year's Wimbledon final for me was that Murray should never feel inferior to anyone, and that we should never doubt his ability to beat the very best.

He has had a disappointing build-up, losing to Ernests Gulbis in Montreal and Tomas Berdych in Cincinnati, but still managed to win one more match than he did in 2012, and his poor run into last year's tournament didn't seem to do him any harm.

He starts here as third seed (a consequence of his inconsistency in the Masters Series events), which means he's likely to have to beat Djokovic and Nadal back-to-back, rather than having the luxury of watching one of them take the other out. But that's not going to cause the 26-year-old Scot to lose any sleep.

"I don't think my game has changed massively [over the past 12 months]," he said. "But I've obviously learned a lot in the last year or so about how I need to play to win these sort of events. I now know what it takes and last year I didn't. I didn't know if I was ever going to win a Grand Slam."

As Murray plots the defence of his title, which will begin with a first-round match against Michael Llodra on Wednesday, he has been a vocal supporter of Evans's impressive North American adventure. The Wimbledon champion has been tweeting enthusiastically, and occasionally watching online, as Evans reached consecutive Challenger finals in California and Vancouver, and then arrived in New York to win three rounds of qualifying.

"I set myself a goal," Evans told me, "that I wanted to come back with a one [a ranking in the 100s] next to my name after America. I just knuckled down a lot more, I've been in the gym a lot more. I'm trying to be a good guy off the court."

Evans started US Open qualifying at 179 in the world, some 188 places higher than he was in March. He has twice had his funding withdrawn by the Lawn Tennis Association as frustration about his attitude and lack of commitment came to a head, but things look to be changing. "Every saint has a past, and every sinner has a future," is the Oscar Wilde quote tattooed to his arm.

"I've always had the game, but I used to take shortcuts," he added. "I've been away [from home] a lot more, but that's what I needed to do - make a few sacrifices. I want to be top 100: I want to be up there with Andy and coming to these tournaments week in, week out, instead of faffing around at Futures and Challengers."

The 11th seed, Kei Nishikori of Japan, will be a formidable first-round opponent, but Evans has shown a liking for the big occasion by twice winning the deciding rubber for Great Britain in the Davis Cup, against Russia earlier this year and Slovakia in February 2012.

British captain Leon Smith has invested a huge amount in the 23-year-old this year, and is delighted to have two men to follow in the draw.

"Dan absolutely loves Andy and what he does, and respects him hugely, and there's been a lot more communication which is good," said Smith. "He practices with him a little bit and he sends him messages. That goes a long way for these guys - they get a huge amount of confidence from that."

One will play on the Arthur Ashe Stadium Court, and the other on court 13, but both have earned their place in the main draw.