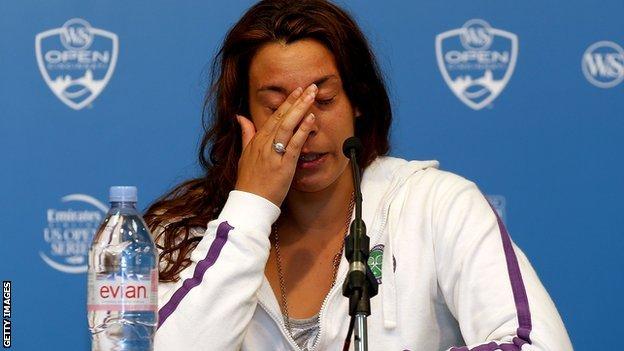 The 28-year-old Frenchwoman, ranked seventh in the world, said she was taking the decision with immediate effect because of persistent injuries.

She made the tearful announcement at a media conference following defeat by Simona Halep at the Western and Southern Open in Cincinnati.

"It's time for me to retire and to call it a career," she told reporters.

Bartoli, who beat Germany's Sabine Lisicki in the Wimbledon final in July, said her Achilles, shoulder, hip and lower back hurt continually when she plays.

She added: "It's never easy, but that was actually the last match of my career. I just can't do it anymore."

After her 6-1 6-4 win at Wimbledon, Bartoli hinted that the physical demands of the sport were taking their toll. "That was probably the last little bit of something that was left inside me," she said on Wednesday.

The 2007 Wimbledon runner-up had won her first Grand Slam at the 47th attempt - the longest wait in women's tennis before a maiden Grand Slam.

She had returned from her Wimbledon triumph to play in Toronto last week and was playing her first match in Cincinnati having received a first-round bye.

"I was fortunate enough to retire on my timetable but many athletes can't, they retire when their body gives out and it sounds to me like she was in constant pain everywhere.

"It wasn't like it was the knee, or the hip or the shoulder it was like the whole body said 'I'm out of here'.

"Once you are in pain, I had bad knees for a few years, it takes all the fun out of playing because every step you take is painful.

"It's been a tough decision to take," she added. "I've been a tennis player for a long time and I had the chance to make my biggest dream a reality.

"I made my dream a reality and it will stay forever with me, but now my body just can't cope with everything."

"She is an inspirational champion and a great ambassador for women's tennis who has dedicated her life to the sport and given so much back to the game," she said.

"I am so proud of her for who she is, her values and for fighting to realise her dream of winning Wimbledon."