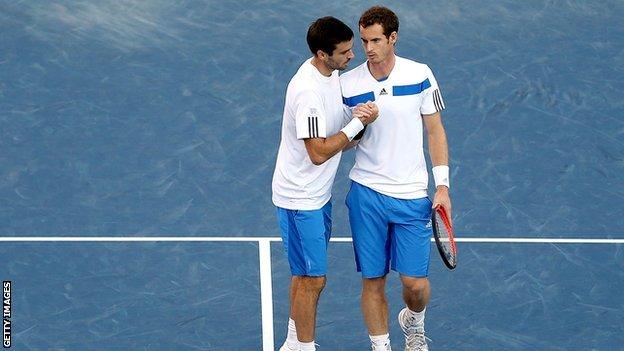 Andy Murray and Colin Fleming are through to the doubles final at the Rogers Cup in Montreal.

"This is my first time (playing) with Colin and we're obviously on a good run," said Murray.

If we could go one more and lift a Masters Series trophy, I might never better that in my career

"It's the best result of my career," added Fleming ahead of his first Masters 1000 final.

Murray stepped in to partner Fleming at the last minute in the absence of regular partner Jonny Marray, who narrowly missed out on qualifying for the event through the rankings.

Defending US Open champion Murray said he was enjoying playing with Fleming in Montreal.

"I've played quite a few of the Masters Series doubles tournaments throughout my career with my brother Jamie and Ross Hutchins," said Murray.

"There's a chance [Colin and I] will play together again in the future but it's best, in the doubles, to stick with your regular partner and not be chopping and changing too much.

"I'm sure once this week's done Colin and Jonny Marray will go back to doing their thing. "

Fleming said he was focused on winning the title.

"I think once you get to any final your aim is to try to win the tournament. So, I'll just be focusing on the match," he said.

"We've been playing some good doubles and I think we're both enjoying it out there on the court and we're looking forward to the final.

"If we could go one more and lift a Masters Series trophy, I might never better that in my career."