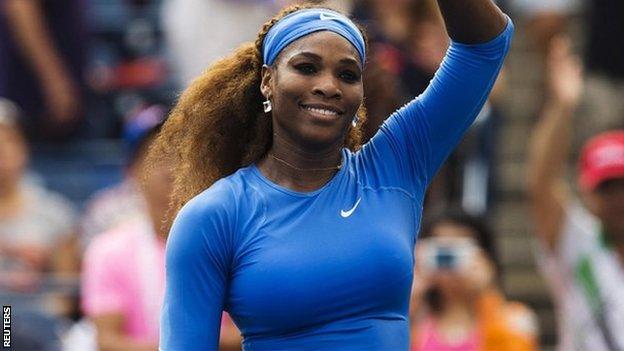 Serena Williams dropped only three games against Kirsten Flipkens as she reached the last eight of the Rogers Cup in Toronto.

The world number one thrashed the Belgian 13th seed 6-0 6-3, and will next face Magdalena Rybarikova.

Slovakia's Rybarikova led Marion Bartoli 7-6 (7-5) 1-0 when the Wimbledon champion retired because of an abdominal injury.

"She wasn't able to play her game as much as she wanted to," Williams said of Flipkens, a Wimbledon semi-finalist last month.

"When you play such a high-ranked player, you have to go in there with the mindset of do the best you can before they can step all over you."

Bartoli blamed her injury on tiredness, saying: "It took me so much energy to win my first Grand Slam that at some point I will have a kind of low and it's normal. I'm human.

"The pain is so large and we can't really say right now exactly if there is a tear at some point, or if it's just like a huge tightness."

Third seed Radwanska fought back from a break down in the second set to beat American 14th seed Sloane Stephens 6-1 7-6 (7-2).

The Pole goes on to face fifth seed Errani after the Italian battled past France's Alize Cornet 7-5 7-6 (7-3).