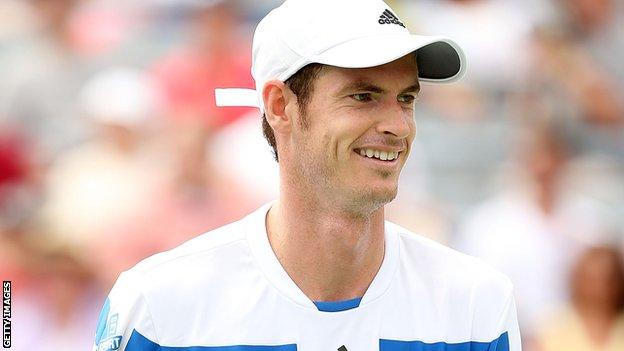 Andy Murray does not predict any awkwardness when he meets Latvian Ernests Gulbis in the third round of the Rogers Cup in Montreal.

At the French Open in May, Gulbis said that the world's top four were "boring players".

"But then when you see him the next day he's really nice to you, so it's a slightly strange one."

The quartet Gulbis was referring to were Roger Federer, Rafa Nadal, Novak Djokovic and Murray.

He likes to go for his shots, plays very aggressive and can be unpredictable on the court.

"I wasn't around at the French Open when he said it," Murray added.

"But, yes, he'll speak to me fine when I see him. I don't really understand why he said it."

Wimbledon champion Murray, the world number two, is using the Candian tournament as part of his preparation for defending his US Open title.

On Wednesday he progressed from the second round of this year's competition, beating Marcel Granollers 6-4 7-6 (7-2).

And now world number 38 Gulbis awaits him on Thursday.

"He likes to go for his shots, plays very aggressive and can be unpredictable on the court.

"He will use some drop-shots and come to the net a little bit but he can also make quite a few errors as well so it's tough to get into a rhythm against him.

"But I'll just try and play a good match tomorrow and hopefully it's a win for me."

Murray also progressed in the doubles with Colin Fleming as they beat Julien Benneteau and Nenad Zimonjic in three sets.

The Scottish pair lost the first set 6-1 before taking the second 6-4 and winning through 10-6 on a championship tie-break.

"I wasn't planning on playing doubles but Colin asked me about five minutes before signing closed," Murray said.

"It was good fun but difficult conditions for all of us."