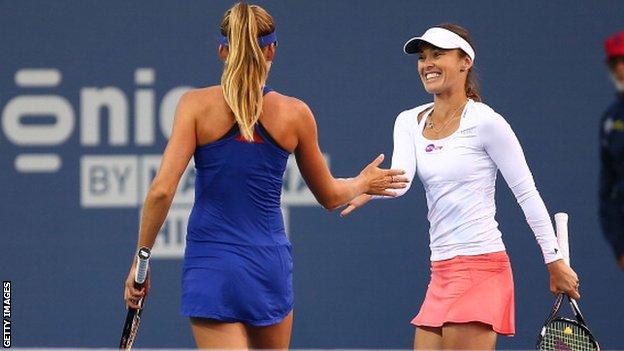 Former world number one Martina Hingis made a winning return to competitive tennis with victory in a doubles match at the Southern California Open.

The 32-year-old Swiss retired in 2007 but accepted a wildcard invitation to partner Slovakia's Daniela Hantuchova.

After the first set, it was pure pleasure

The pair took just 51 minutes to beat Julia Goerges and Darija Jurak 6-1 6-1 in the first round in Carlsbad.

"It was awesome," said Hingis. "To play with Daniela, it had to take her a lot of courage to dig me out of the grave."

The five-time Grand Slam champion added: "I'm very happy to have a partner like her. It makes it much easier.

"I was really nervous going into the match, but she was so solid and that gave me so much more confidence.

"After the first set, it was pure pleasure."

An ankle injury forced Hingis to retire in 2003 aged 22, but the sport's youngest Grand Slam singles winner made a comeback three years later.

She ended her comeback in November 2007, revealing she had tested positive for cocaine at that year's Wimbledon.

Hingis, a winner of 43 WTA singles titles, said she had "never taken drugs", but did not appeal against the two-year ban.

Hingis and Hantuchova, who are scheduled to play in in warm-up events in Toronto and Cincinnati before competing at the US Open, now face American third seeds Raquel Kops-Jones and Abigail Spears.

Asked earlier in the week if she was considering a return to playing singles, Hingis said: "Not at this point, no."