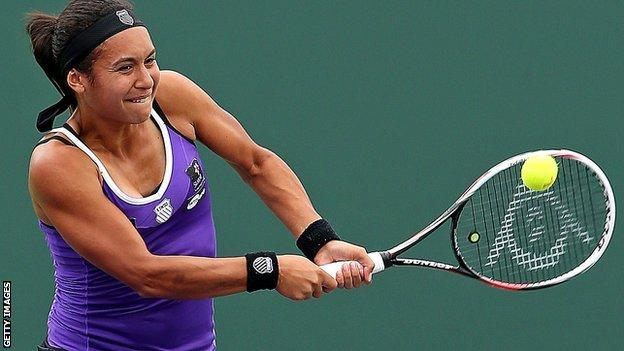 The 21-year-old will play French fourth seed Alize Cornet in round two.

British number one Robson beat Ayumi Morita 4-6 7-5 6-2 in the Southern California Open at Carlsbad and will face Petra Kvitova in the next round.

Watson recently and is working with American Chip Brooks in Washington, before Lawn Tennis Association lead women's coach Jeremy Bates takes over in August for Toronto, Cincinnati and the US Open.

She has slipped from a career-high ranking of 39 in February to 76th in the world after glandular fever forced her off the circuit for two months in April, but arrived in Washington saying she felt "the best that I've felt this year".

The Guernsey native has also spoken about developing a bigger serve and more attacking game, and an ace count of 14 in her first match since Wimbledon will have been encouraging.

Her fitness was tested immediately as she was pushed hard by Mueller, ranked 499 in the world but confident after two wins in qualifying, and lost a tight first set after recovering a break.

Watson found her range on serve to close out the second but lost an early advantage in the third, before breaking for the fifth and sixth times in the match to finally see off the challenge of Mueller after two hours and 10 minutes.

Robson, ranked 32nd, had an even more testing encounter against world number 52 Morita in a match which lasted two hours and 40 minutes.

The Japanese player beat Robson on clay in Portugal earlier this year, and was two points from doing so again when she served at 6-4 5-4 30-0, but the Briton fought back.

A costly double fault from Morita in the 12th game of the second set brought the scores level, and Robson raced into a 5-1 lead in the decider, although failed to serve out the match and needed her sixth break of the match to secure the win.

"It felt like every time I hit a good shot, she would hit a better shot. So I just had to stick with it and wait for my chance.

"After I broke her back at the end of the second set, I felt the momentum on my side again."