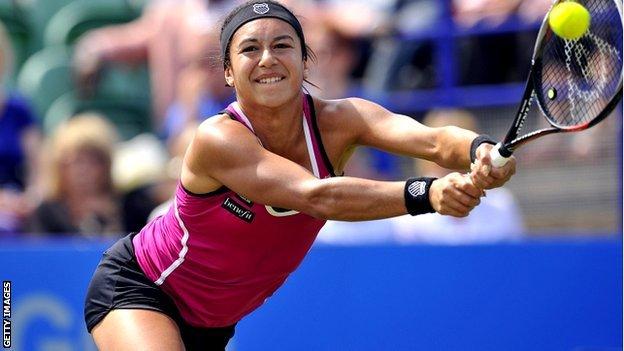 Heather Watson has changed her coach and her game plan as she targets a more attacking style to take on the best in the world.

The British number two after returning to her base in Florida following Wimbledon.

"With coaches it's always a big decision," the 21-year-old told BBC Sport. "I put a lot of thought into it and I thought it was the best decision for me and my career.

"I think to get to the next level I need to change some things in my game, improve some things, add some things, so that's part of me coming to this decision."

"I watched the whole of the final and was completely, 100% backing Andy to win, especially after last year. At the beginning of the match I really didn't know who was going to win but as soon as Andy won the first set, I didn't think there was any chance for Djokovic.

"It was absolutely brilliant and I hope it inspires lots of people to play tennis. It 100% inspires me. He works so hard, I see what he does on and off the court and how he studies the game, and it really motivates me."

Watson admitted it had not been easy to dispense with Hadad's services after first meeting him when she arrived at the Nick Bollettieri academy in Florida as a 12-year-old.

"It's always going to be a tough decision," said Watson, speaking before this week's Citi Open in Washington. "At the end of the day it's my job, it's a business. I've got to do what is right for me and my career."

Wimbledon champion Andy Murray made changes to his coaching set-up at a similar age to Watson, and while his example was not behind her decision, she added: "Top players make decisions like that.

"He's changed his coach to Ivan Lendl and obviously that was a great decision, and I'm thinking that's what I need to do."

Watson has slipped from a career-high ranking of 39 in February to 76th in the world after a debilitating bout of glandular fever that forced her off the circuit for two months in April.

She returned at the French Open in May and played the grass-court season, in the first round of Wimbledon before returning to Florida.

"I've had some time with Nick Bollettieri while I've been at the academy," said Watson.

"I think he's absolutely right and that's what I want to do now."

Already renowned for her athleticism and fighting spirit, Watson hopes to add an attacking element that will allow her to challenge the big-hitters at the top of the game.

"I know I'm a good volleyer," she said. "I love to play doubles, so why don't I use that in my game? It's because I haven't really worked on it. I want to work on it more and I want to add a slice to my game.

"In today's game you need to be aggressive, but also very consistent. It's not all about trying to smack loads of winners, it's also about chasing down balls and making a lot of balls and I have that. I feel like I need to add the winners and the aces to my game."

Asked whether she was ready for her results to suffer as she makes such significant changes, Watson insisted: "I'm definitely prepared for that.

"I said this to my family - I got to 39 in the world not doing all these amazing things but just with my regular game, so imagine if I did add coming to the net, a massive serve and slice into my game. Imagine what I could do then.

"I think it's very exciting and I'm looking forward to it."

It is clearly a long-term project, but the short-term business of winning matches and maintaining a solid ranking continues.

Watson will work with American Chip Brooks, from the Bollettieri academy, as she returns to action in Washington this week, before LTA lead women's coach Jeremy Bates takes over next month for Toronto, Cincinnati and the US Open.

And for the first time in 2013, the Guernsey native feels physically 100% and ready for action.

"I've been in Florida for the past three weeks where it's super hot and humid, and I've had so much on-court time and done a lot of fitness, so I'm feeling very good now. I'm feeling the best that I've felt this year.

"It's been a really tough year for me having finished 2012 well and got to my career high, only to then kind of have it taken away a bit.

"We're over halfway through the year but I feel like it's the start for me now, because it's the first time I've felt good, healthy and ready to play."