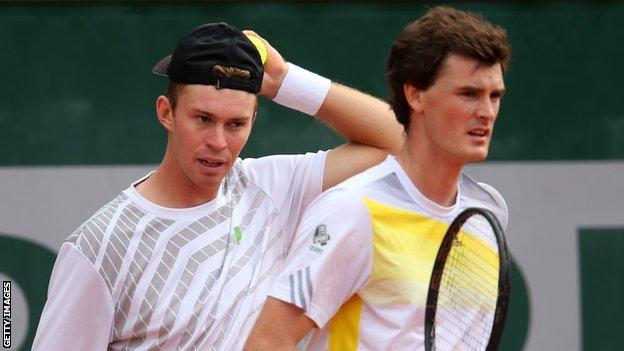 Britain's Jamie Murray won the ninth ATP doubles title of his career and his second with Australian partner John Peers with victory in Gstaad.

Third seeds Murray and Peers beat unseeded Spanish duo Pablo Andujar and Guillermo Garcia-Lopez 6-3 6-4 on clay in the final of the Swiss Open.

It was the 11th tournament in which the Scot has teamed up with Peers.

Britons Colin Fleming and Jonny Marray failed in their bid to win their first title as a pair with defeat in Atlanta.

Murray, 27, is ranked 63rd in doubles, 40 places lower than his career high of 2011, but there have been encouraging signs since he teamed up with 25-year-old Peers after the Australian Open in February.

The pair showed they can compete with the best when they beat world number one pairing Bob and Mike Bryan to win the Houston title in April.

Murray said: "It's been good. We've been playing a few months now, working hard together to try and get the team as good as we can.

"We've had some good results and we'll keep trying to go for the future."

Peers added: "I thought it was a lot of fun. The balls bounce a bit higher, it's a bit more lively. We handled it well."