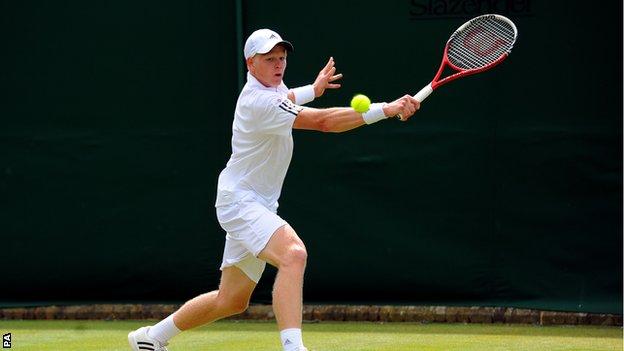 Kyle Edmund hit back from early exits in the men's singles and doubles to win his opening junior singles match.

Billy Harris, Jonny O'Mara and Julian Cash also went through with impressive victories in their first round matches.

Compatriot Harriet Dart was the only British winner in the girl's singles - beating Latvia's Jelena Ostapenko 6-4 7-6 (11-9) in the first round.

The 16-year-old, who lives in London and trains in Nottingham, now faces second seed Ana Konjuh of Croatia in the second round.

Edmund, from Beverley, was broken straight away and trailed 4-2 but he reeled off four straight games to take the set and won in exactly an hour.

However, eight other British players bowed out of the junior events.

Scotland's wildcard Maia Lumsden was forced to retire because of an eye problem in the final set of her girl's singles opener against Petra Uberalova of Slovakia when trailing 4-6 6-3 4-1.

She told BBC Scotland: "I was 4-3 down in the second when my set left eye went all blurry.

"I didn't feel good at all on the court. Anything to that side was really blurry and I tried to keep playing for a while but then called doctor put some eye drops in. It didn't get any better so I had to stop.

"The same thing happened to me last week but not on court and I laid down for 10 minutes and was completely fine."