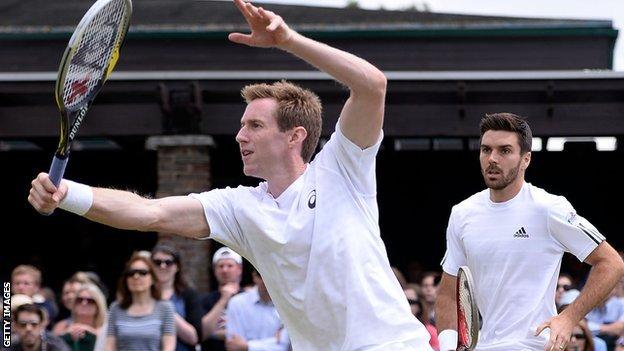 Marray, with Heather Watson, and Fleming, with Laura Robson, later each went out of the mixed doubles.

And Dominic Inglot and Treat Huey of the Philippines lost to the Bryan brothers in the men's doubles.

At the same time Robson and Fleming were going down 6-7 (2-7) 6-2 6-4 to Slovakia's Filip Polasek and Janette Husarova, who won on their second match point after Fleming had foot faulted to give them advantage.

Marray's men's doubles match was dominated by serve and he was the only man to be broken - once in the second set and once in the third.

The win provided revenge for Lindstedt, who with Horia Tecau, lost in the 2012 final to Marray and Fredrik Nielsen.

It was the third year in a row the pair had been runners-up in the competition.

Marray admitted afterwards that the better team had won, telling BBC Sport: "We are obviously a bit disappointed but I can't really complain about today's result.

"The guys we played were just a little bit better than us on the day, served really well and didn't really give us a look-in on their service games."

Fleming agreed, saying: "Not a lot went wrong, we played a decent enough match, it was just that our opponents served unbelievably well in particular.

"We knew it was going to be a 50/50 match before it and they just managed to tip it in their balance. It wasn't a bad day, just credit to them - they played great today."

Sheffield's Marray and Scotland's Fleming received a rapturous welcome from a crowd standing four or five deep in some places as they came on to court in bright sunshine.

Marray added: "We got a great reception and we had done for our previous two rounds as well. All the Brits got behind us and it's great fun to play in front of. The support has been great so we're just a bit disappointed we couldn't give them more to shout about."

Some lively rallies dominated the opening exchanges, which went with serve until the first alarm for the British pair came in the seventh game.

Fleming conceded three break points in what was his second service game, but saved them all and the set went to a tie-break.

Lindstedt and Nestor led 6-5 after four mini-breaks but Fleming then served a double fault to hand the Swedish/Canadian pair the set in 49 minutes.

The standard of serving in both the second and third sets was very high, with no games going to deuce in either set and it always looked likely to be the odd point that would be crucial.

And so it proved with a single break point in each set enough to decide the match.

A shot bisected Marray and Fleming to break the champion's serve on set point to give Linstedt and Nestor a two-set advantage.

In the third set, Marray was broken to give the ninth seeds a 5-3 lead and Lindstedt served out the match to take him and Nestor into the quarter-finals.

Marray admitted afterwards that the better team had won, telling BBC Sport: "I am obviously a bit disappointed but I can't really complain about today's result.

"The guys we played were just a little bit better than us on the day, served really well and didn't really give us a look in on their service games."