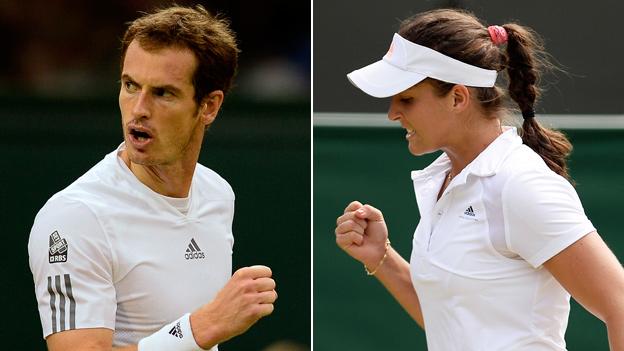 Andy Murray and Laura Robson have ensured there will be British interest in both the men's and women's fourth round at Wimbledon for the first time in 15 years on Monday.

The queue for tickets began forming on Saturday ahead of arguably the best day for spectators as the quarter-final line-ups are decided.

Wimbledon announced on Sunday that the allocation for Centre and Number One Courts was already sold out, and advised people to wait until Monday if they wish to queue for ground passes.

Round four is familiar territory for Murray, who plays Mikhail Youzhny in the second match on Centre Court at approximately 14:30 BST.

For the first time, he will have a compatriot to share the spotlight as Robson takes on Kaia Kanepi in the first match on Court One at 13:00.

With the weather forecast looking positive, 16 men's and women's singles matches will be played across seven courts.

Top seeds Novak Djokovic and Serena Williams remain the ones to beat after playing superbly in the first week.

If Djokovic is the favourite to win a second Wimbledon title, Murray looks in the kind of form to challenge for his first and so end Britain's 77-year wait for a men's champion.

The Scot, 26, swept through the first week - beating Benjamin Becker,Yen-Hsun Lu and Tommy Robredo without dropping a set - and has a 2-0 record against Russian 20th seed Youzhny.

With Rafael Nadal and Roger Federer removed from his half of the draw in the early rounds, Murray's major worry seems to be expectations running ahead of themselves.

"I think there's a lot more pressure on me now with them being out," said Murray. "I mean, I don't read the papers, but there are papers in the locker room, so you see some of the headlines and stuff. It's not that helpful.

"But you need to be professional enough to not let that stuff bother you and just concentrate on each match."

Youzhny, 31, is through to the last 16 for the eighth time in 13 visits to Wimbledon, and lost to Federer in the final of the warm-up event in Germany earlier this month.

"He was in the final in Halle and had a very tight match with Roger there. He's been in the quarters here, he's been in the second week numerous times, he likes the courts. He's a very talented guy."

Robson, 19, is dealing with a different kind of pressure to Murray, with few mentioning her name among the title contenders, but her obvious ability has raised expectations about just how far she can go.

Having beaten 10th seed Maria Kirilenko in round one, Robson has ousted Mariana Duque-Marino and Marina Erakovic.

She made it to the fourth round of the US Open last September, beating Grand Slam champions Kim Clijsters and Li Na along the way, and described matching that achievement at Wimbledon as "pretty cool".

Estonian Kanepi, ranked eight places lower than Robson at 46 in the world, is a former quarter-finalist and stands between the Briton and a first major quarter-final.

"I can definitely play better, but it's tough to play your best tennis all the time," said Robson. "What I've been working on is just accepting that I'm not going to play great tennis in every match.

"I might have a couple of good games here and there, but the majority of the time I'm just going to have to work on being super consistent and go from there."