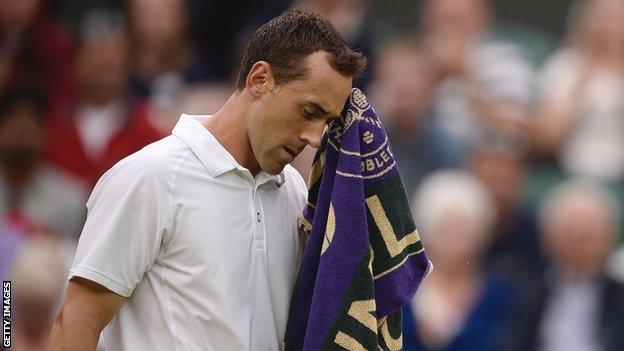 Wimbledon legend Martina Navratilova says the dearth of talent in men's tennis in the United States is down to a lack of hunger in American players.

For the first time in 101 years no American has reached the third round of the men's singles at Wimbledon.

On Thursday, qualifier Bobby Reynolds was beaten by world number one Novak Djokovic on Centre Court.

"It comes down to hunger and opportunity, the kids in America have it easier," said Navratilova.

"On the women's side the younger players are beginning to step up to the plate but the men haven't got there yet.

"Most of the Americans that are great athletes go into other sports.

"Sam Querrey [the world number 19 lost in the first round at Wimbledon] is a bit of a disappointment, and not just in this tournament.

"He hasn't developed into the player we were hoping for. And Ryan Harrison and Jack Sock haven't developed yet either."

The last time no American men appeared in the third round was 1912, when none entered the draw.

And American men have gone 39 Grand Slams without a triumph, easily surpassing the previous mark of 31 in a row between the 1955 US Open and Wimbledon in 1963.

Tennis is about number 10 in America as far as popularity is concerned. Our best athletes are spread through other sports

Andy Roddick was the last American male to win a Grand Slam, the US Open in 2003, and hold the number one ranking but he retired last year.

The only other American men in the world top 50 are John Isner (21), who retired hurt after two games of his second round match on Wednesday, and Mardy Fish (43), who was unable to play at Wimbledon because of a heart condition.

Meanwhile, the women's game in the United States is flourishing. Serena Williams is the world number one and youngsters such as Sloane Stephens (ranked 17) and Madison Keys (52) are standing by.

The US still tops the league for the most ranked players - 125 men and 111 women - and more than 13.2 million regularly play tennis but four-time Grand Slam champion Jim Courier said tennis in his country is struggling to attract the best male talent.

"Tennis is about number 10 as far as popularity is concerned," said the former Wimbledon finalist. "Our best athletes are spread through other sports."

"The greatest American athletes play football or basketball. We are lower down on the totem pole."

Two-time US Open champion Tracy Austin says men's tennis in the United States was suffering as a result of the increased globalisation of the sport.

"The game is so much more international now," said Austin.

"Pretty much every country on the globe plays tennis so it is harder to break into the top 100.

"The US Tennis Association has 17 different sections and each of these sections is going to have to do a better job of getting their coaches to identify the best athletes at a younger age.

"Patrick McEnroe is head of the USTA player development and he has sent in certain coaches to each of the three main training centres in Florida, New York and the west coast.

"Some of the young ladies that are coming through, like Jamie Hampton, Madison Keys and Melanie Oudin, have grown up together and trained together in Florida.

"If you see someone else training so hard and you are with someone who has the same goals as you it's helpful to all. "