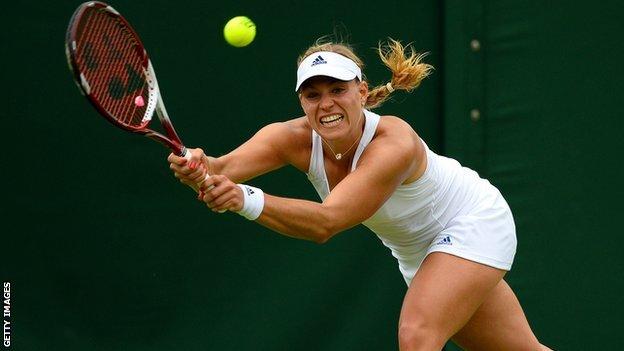 Germany's Angelique Kerber was among the seeds to exit at Wimbledon on Friday with a three-set second-round defeat by Estonia's Kaia Kanepi.

The 25-year-old German's loss means only four of the top 10 seeds reached the third round of the women's singles.

Petra Kvitova could make a third-round exit as her clash with Ekaterina Makarova was suspended with the 2011 champion a break down in the third set.

Kanepi, 28, could play Laura Robson in round four after the 19-year-old Briton beat Mariana Duque-Marino 6-4 6-1.

Only 10 of the top 10 men's and women's seeds have reached the third round, the fewest of any Grand Slam in the Open era. With only four women making the last 32, it is the worst performance by the women's seeds at any Open era Slam. Here is how the top women seeds have fallen:

Both first have to negotiate last-32 ties, Robson against New Zealand's Marina Erakovic, 25, and Kanepi with the United States' Alison Riske, who defeated Urszula Radwanska in straight sets.

The Riske-Radwanska and Kerber-Kanepi ties were both rescheduled for Friday following rain on Thursday.

Kerber, who reached the semi-finals last year, held a 5-1 lead in the second-set tie-break, but won only one more point to allow Kanepi back in.

Kanepi, a Wimbledon quarter-finalist three years ago, double-faulted twice on match point before converting her third chance with a backhand winner.

"I had my chances in the second set but I didn't take them," said Kerber. "In the third she was playing unbelievable and I could do nothing."

When the third round did get under way, Kvitova, at eight the highest seed remaining in the bottom half of the draw, was pushed to the brink of elimination.

Having been forced to retreat to the locker room at 3-3 in the opener, Kvitova resumed to take the first set yet, trailing 6-3 2-6 1-2, there were few complaints from her when the umpire concluded play should be suspended.

Earlier in the day, Kirsten Flipkens set up a last-16 clash with Italian Flavia Pennetta.