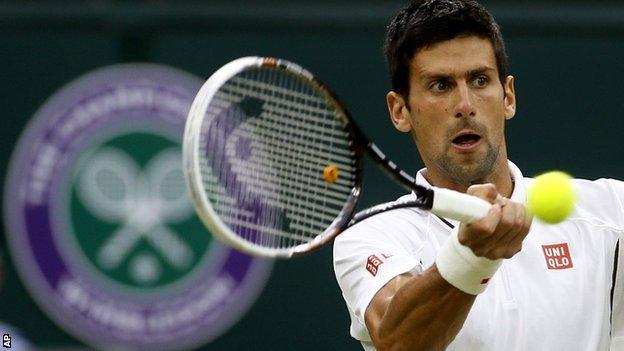 World number one Novak Djokovic took advantage of the Centre Court roof to make it through to round three on a rain-hit day at Wimbledon.

British number one and she will now play Colombia's Mariana Duque-Marino on Centre Court at 13:00 BST on Friday.

Andy Murray will take on Tommy Robredo in the third match on Centre.

Reynolds, ranked 156th, made Djokovic work but the top seed prevailed in one hour and 55 minutes, and will play Jeremy Chardy or Jan-Lennard Struff in the last 32.

"With the roof closed it was a bit different," Djokovic told BBC Sport.

"I needed some time to adjust to the conditions and it was a bit slower than I expected, but I played well in the second and third sets.

"I think my game is there, I just need to capitalise on my opportunities. Today I was very poor on the break points but credit to my opponent, it was a nice match and I look forward to the next one."

The result means there will be no American man in the third round at Wimbledon for the first time since 1912.

Tomas Berdych, Juan Martin del Potro and Richard Gasquet made progress, but fourth seed David Ferrer did not make it onto Court One to play Roberto Bautista Agut before the rain arrived.

Djokovic was given a good test by Reynolds, who repeatedly frustrated the Serb by saving a succession of break points.

The 2011 Wimbledon champion needed a tie-break to edge the first set and looked visibly relieved when he finally made the breakthrough in game three of the second.

He remained utterly dominant on his own serve, and reeled off eight of the last nine games to win in some style.

"The top guys are going out and it's a very high level of tennis. Now I will focus on my third round. It's a big tournament and I like to play here, and I want to stay alive a few more days."

The Argentine will next face the winner of the match between Grega Zemlja and Grigor Dimitrov, which was finely poised at 9-8 to Zemjla in the fifth set before the rain came.

Michael Llodra and Paul-Henri Mathieu were the latest men to pull out through injury, taking the number of singles retirements to nine.