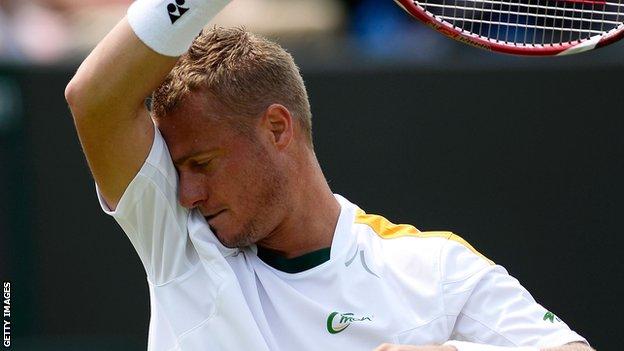 Lleyton Hewitt, the 2002 Wimbledon winner, has been knocked out of the 2013 Championships by flamboyant German qualifier Dustin Brown.

Jo-Wilfried Tsonga is also out after withdrawing with a knee injury while trailing Ernests Gulbis 3-6 6-3 6-3.

The number six seed, who could have been Andy Murray's quarter-final opponent, needed a medical timeout at the end of the second set but continued to struggle with his movement.

He was the seventh withdrawal of an injury-ridden day at SW19.

Marin Cilic, Radek Stepanek, John Isner, Victoria Azarenka, Yaroslava Shvedova and Steve Darcis, who beat Rafael Nadal in the first round, all pulled out through injury.

Brown, will now face Adrian Mannarino of France who went through courtesy of Isner's retirement.

"It's going to take a while to sink in," said the world number 189. "I don't normally cry, I'm playing Lleyton Hewitt, a guy I watched growing up, and it's emotional.

"I've been so often close to winning top matches and I pulled it together for this one. It was tough to stay focused and I just tried to stay in it. The way I was playing and serving, people have to beat me the way I want to play, not the way they do."

Julien Benneteau, seeded 31, is out after he was beaten 7-6 (7-1) 7-6 (7-4) 6-4 by Spaniard Fernando Verdasco while number 20 seed Mikhail Youzhny was taken to five sets by Canadian Vasek Pospisil.