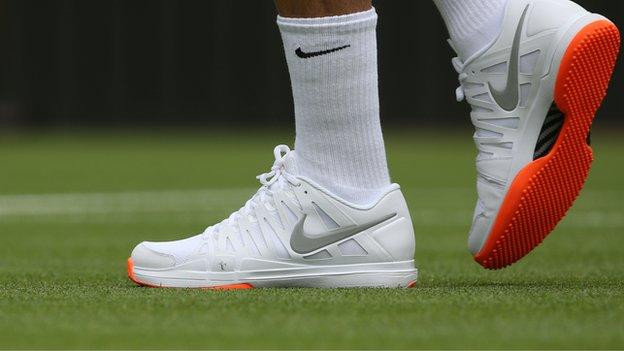 Roger Federer has been told he cannot wear his orange-soled trainers again after they were judged to have broken Wimbledon's all-white dress code.

The 31-year-old seven-time Wimbledon champion played in them during his opening-round win on Monday.

But he fell foul of Grand Slam rules, which state: "Including the warm-up period, players at Wimbledon must be dressed almost entirely in white."

The Swiss plays next on Wednesday, when he faces Sergiy Stakhovsky.

That match follows the 6-3 6-2 6-0 win he registered against Victor Hanescu as he began the defence of his men's singles crown.

When contacted by BBC Sport, an All England Club spokesman said a number of players had been spoken to about their attire in round one.

However, reigning women's singles champion Serena Williams has not been told to change her footwear for future rounds despite wearing trainers with orange trims, heels and a logo in her first match of this year's event against Mandy Minella.

In a bid to prevent such incidents, tournament regulations state that manufacturers must submit all clothing designs for inspection some time before the start. But there is less intense scrutiny of shoes before play begins.