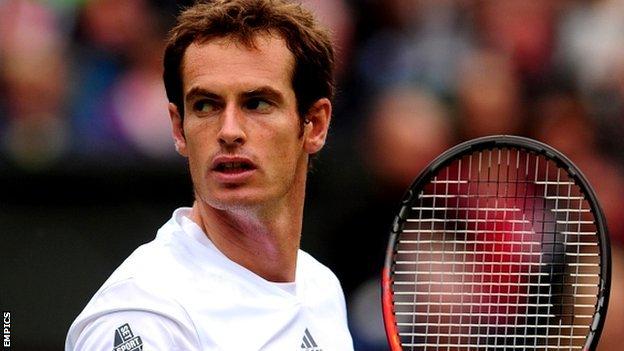 Andy Murray will take the lessons from one of the hardest defeats of his career into Wednesday's second-round match against Yen-Hsun Lu at Wimbledon.

The British number one plays Taiwan's world number 75 in the second match on Court One at approximately 15:00 BST.

Murray has played Lu twice before, beating him in Indian Wells in March, five years after a shock defeat in the first round of the Beijing Olympics.

"I was so excited to play in the Olympics and be part of it that I was doing a lot of media," Murray said in his BBC Sport column.

"I was going to the opening ceremony, I was trying to speak to all of the athletes and take pictures with them, I was collecting the pins from each team - I was loving being part of it.

"But when I lost, I thought, 'Why was I doing all that stuff? I'm here to win matches, I'm not here to collect pins.' I loved going to the opening ceremony but had to think, 'Is that the best thing for my preparation?'

"I learnt a lot from that match. It was one of the toughest losses of my career, and I don't plan to repeat the experience on Wednesday."

Lu beat British number two James Ward over four sets in the opening round, and the 29-year-old is a former world number 33 and Wimbledon quarter-finalist.

With that in mind, Murray refused to look too far ahead despite the absence of Rafael Nadal in his half of the draw after the Spaniard's surprise loss to Steve Darcis on Monday.

"It's pretty irrelevant right now," said Murray. "I would have to win at least four more matches before that would even become something I would think about."

Second seed Victoria Azarenka will open play on Centre Court against Italy's Flavia Pennetta at 13:00, and the Belarusian will hope that her knee holds up after falling and twisting it during her first-round match.

"For two minutes I had such a consistent pain that it just completely freaked me out what happened," said the Belarusian.

Azarenka and Pennetta will be followed on the main show court by sixth seed Jo-Wilfried Tsonga against Latvian Ernests Gulbis, and seven-time champion Roger Federer against Ukrainian Sergiy Stakhovsy.

Laura Robson, the British women's number one, will be in action on Thursday.