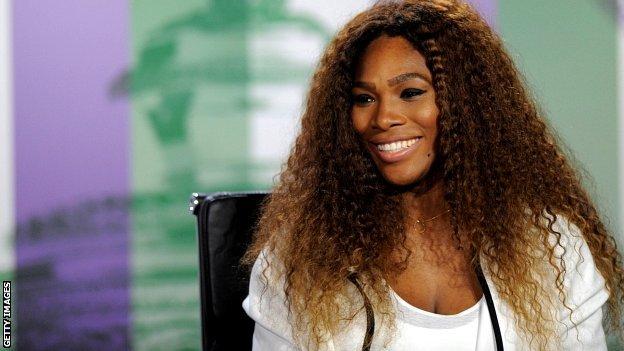 World number one Serena Williams will attempt to put recent off-court distractions aside when she begins her Wimbledon title defence on Tuesday.

The American, 31, will play Luxembourg's Mandy Minella in the opening match on Centre Court at 13:00 BST, with men's top seed Novak Djokovic up against Florian Mayer in the following match.

Williams is on a career-best winning run of 31 matches, and claimed her 16th Grand Slam title at the French Open earlier this month.

There has been nothing in recent tournaments to suggest her rivals are capable of denying the champion a sixth Wimbledon title.

The only things that seemingly could upset her are the absence of sister Venus through injury, and

"This is the first year I believe I've played Wimbledon and Venus hasn't been here, so I feel so lonely," said Williams.

"I feel like something is missing, so I talk to her all the time, more than usual."

If Williams has her sights set solely on winning the title, Britain's leading women will be pleased if they can overcome higher-ranked opposition in the first round.

Robson plays Russia's world number 10, Maria Kirilenko, in the second match on Court One, while Watson takes on American rising star Madison Keys in the opening match at 11:30 on Court Two.

Ranked 38th, Robson is hoping the crowd will help her as it did at the Olympic Games last year, when she won silver in the mixed doubles with Andy Murray.

"The Olympics last year was like the best crowd any of the Brits has ever had," said Robson. "It would be great if they brought that kind of atmosphere on Tuesday."

Tara Moore, the world number 198, is the remaining Briton in singles action, and she plays Estonia's former quarter-finalist Kaia Kanepi in the fourth match on Court 17.

Djokovic was given a kind draw in terms of the latter stages, should he get that far, with Andy Murray, Rafael Nadal and Roger Federer all in the opposite half.

But the Serb, 26, has a potentially awkward opening match against Germany's Florian Mayer, the man he beat in the quarter-finals last year.

"He's a tricky player," said the 2011 champion. "He has a bit of an unorthodox game. He can be very dangerous on this surface. He loves playing on grass."

David Ferrer is the fourth seed and so expected to meet Djokovic in the last four, and the Spaniard begins his campaign against Argentina's Martin Alund in the third match on Centre Court.