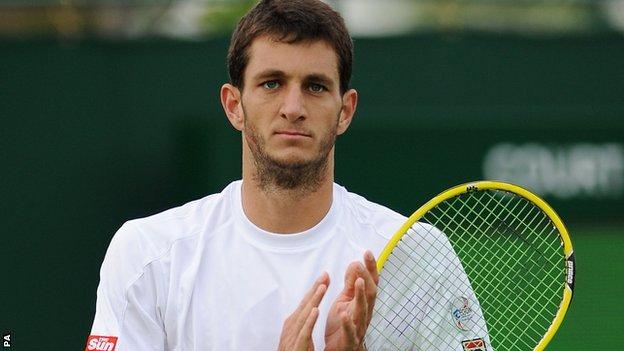 British wildcard James Ward missed the chance to progress to the second round despite taking the opening set against world number 75 Yen-Hsun Lu.

Edmund, 18, was given a wildcard after impressive recent results at Queen's Club and Eastbourne, but went down 6-2 6-2 6-4 to the big-serving Janowicz.

Seven of the 10 Britons playing singles were scheduled for Monday, including second seed Andy Murray.

By the time Ward, 26, took to the court only Murray had made it past the first hurdle but a near faultless first set saw him match his opponent from Taiwan, who is ranked 144 places higher than him in the world.

He hit just four unforced errors on his way to taking the first set on a tie-break.

Tie-breaks were needed to settle two further sets and in the end Lu won just seven more points in total.

Keothavong, 29, completed a poor day for the home nations as she became the sixth Britain to be knocked out in the first round.

Baltacha, 29, could not take advantage of her wildcard as she went down 6-4 6-1 to Italy's Flavia Pennetta in the first match on Court Three.

The Scot had hoped to build on a good run of form since returning from eight months out with a foot injury in April, but was outplayed by Pennetta.

Just one place separates the pair in the rankings, with the Italian former top-10 player down at 166 as she too makes her way back after wrist surgery.

Pennetta used a protected 'special ranking' to enter the main draw at Wimbledon, and she dominated from the outset with an immediate break in each set.

By the time Baltacha dumped a forehand into the net to fall 3-0 down in the second set, the result was beyond much doubt, and Pennetta finished the job when the Briton netted another forehand after one hour and 14 minutes.

"I knew she would come out with some quality and she did," said Baltacha. "Unfortunately I was on the receiving end of it.

"I'm obviously disappointed but I'm happy with how my return is going and I'm looking forward to the future.

"I want my number one spot back, it'll be a tough challenge but give me a year-and-a-half and I'll be back there, it will be a brilliant challenge for me."

Edmundfollowed Baltacha onto Court Three and suffered a similar fate, albeit against an opponent ranked 363 places higher at 22 in the world.

"It was a tough experience," said the teenager from Beverley in Yorkshire. "It was very tough out there to get much rhythm.

"He's such a big player, hits the ball really hard, and if you're not on it 100%, it's very tough. I still played OK, I thought, but at that level I think I need to play better to win."

Konta, the British number three, fought hard in the second set but lost 6-2 7-5 to former world number one Jelena Jankovic of Serbia, and Murray was beaten 6-3 6-4 by Italy's Camila Giorgi.