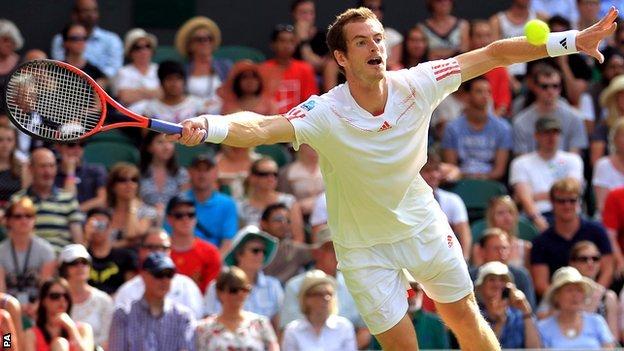 Andy Murray will resume his quest for a first Wimbledon title on Monday when the 127th championships get under way.

Roger Federer ended Murray's hopes in the final last year, and the Swiss opens proceedings on Centre Court at 13:00 against Romanian Victor Hanescu.

"The players that are around now are so good, so consistent.

"I've thought about finishing my career and not winning Wimbledon, and I'm comfortable with that. I can't guarantee I'm going to win Wimbledon.

"I'm doing everything I can to give myself the best possible chance; I work as hard as I can."

Russia's Maria Sharapova, the 2004 champion, will play Kristina Mladenovic of France in the second match on Centre, while top seeds Novak Djokovic and Serena Williams begin on Tuesday.

The weather forecast suggests that rain should not be a major issue throughout the first week, and the traditional queue for tickets began forming as early as Saturday.

Those who make it into the All England Club on Monday will witness a packed schedule that also includes two-time champion Rafael Nadal and Australian Open winner Victoria Azarenka on Court One.

Play begins on the outside courts at 11:30 BST, but Centre Court will be the focus of attention for many, with both of last year's men's finalists in action.

Federer, 31, won his seventh Wimbledon title in 2012, denying Britain a first men's champion since Fred Perry in 1936 and bringing Murray to tears.

The 26-year-old Scot would reverse that result a few weeks later to take Olympic gold, and in September became the first Briton to win a Grand Slam title in 76 years at the US Open.

Federer is targeting an unprecedented eighth Wimbledon title, 10 years after his first, but has a tough draw that could see him play Nadal in the quarter-finals.

"It was never supposed to be easy winning Grand Slams," he said. "I'm ready for the challenge."

There will be 10 Britons in round one of the singles, although only Murray, Laura Robson and Heather Watson qualified by right through the world rankings, with the rest relying on wildcards.

They will benefit from the much-improved prize money on offer for the early stages this year, with first-round losers set to receive £23,500 and anyone who gets through that match guaranteed at least £38,000.

Defending champion Williams, 31, must wait until the second day to begin her bid for a sixth title, and the record £1.6m winner's cheque.

Williams is on a career-best winning run of 31 matches, with Belarusian Azarenka seeded to face her in the final, but it is the American's rivalry with third seed Maria Sharapova that is likely to dominate the women's event.

The Russian made some barbed comments about the world number one in her pre-match media conference and, asked about a potential meeting in the final, Williams responded: "I think everybody would like to see that."

The men's title is expected to be decided between the 'big four' of Djokovic, Murray, Federer and Nadal, although the Spaniard is seeded fifth, below compatriot David Ferrer, after missing seven months with a knee injury.

"The rankings say these kind of things can happen," said the eight-time French Open champion. "But I won't see them before quarter-finals and semi-finals.

"My view is, if I arrive in the quarter-finals it's because I will be ready. But for me, it's going to be very tough to be there."