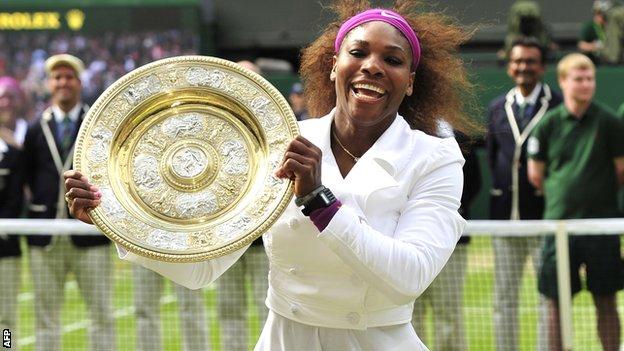 Defending champion Serena Williams will begin her bid for a sixth Wimbledon title against Mandy Minella on Tuesday.

The 31-year-old American has 16 Grand Slam titles and, since losing in the first round at the French Open last year, she has won 74 of her 77 matches.

That includes three of the last four major titles, the exception being this year's Australian Open when she lost in the quarter-finals to Sloane Stephens.

Serena, who returned to Wimbledon last August to win the Olympic singles and doubles titles, will not have to face sister Venus, 33, the five-time Wimbledon champion, after she withdrew from the event because of a back injury.

Serena, who has also won five Wimbledon doubles titles with Venus, has never previously played Luxembourg's 27-year-old world number 92 Minella, who has never progressed beyond the first round stage at the Australian Open, French Open or Wimbledon, but who has twice reached round three at the US Open.

Maria Sharapova, who lost to Serena in the Olympic final and again in this year's French Open final, is seeded third this year.

The 26-year-old Russian, who won her sole Wimbledon title as a 17-year-old in 2004, will open her campaign against 20-year-old Kristina Mladenovic of France, the world number 39, who won her first WTA title at the Taipei Open last year.