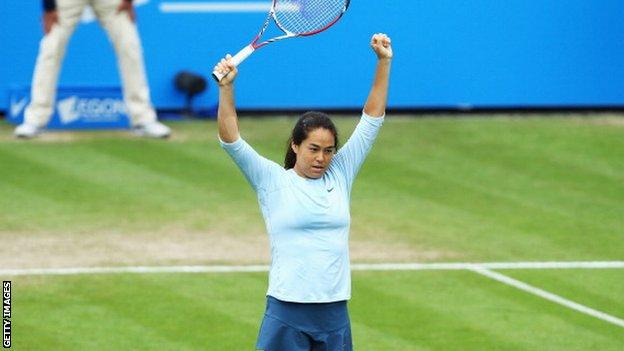 Qualifier Jamie Hampton knocked out former champion Caroline Wozniacki to earn a place in the final of the Aegon International in Eastbourne.

Just to get the hold there and stick with it and stay positive was definitely a plus. I'm definitely proud of myself

Should she triumph, Hampton would become the first American to win at Eastbourne since Chanda Rubin in 2003.

Wozniacki had failed to serve out the match after returning from a rain break and the American world number 41, who will play compatriot Sloane Stephens in the first round of Wimbledon, saved two break points at 5-5 in the second set.

"I stuck with it," said Hampton. "Just to get the hold there and stick with it and stay positive was definitely a plus. I'm definitely proud of myself."

In the men's draw, Spain's Feliciano Lopez defeated Ivan Dodig 7-6 (7-3) 6-1 and will meet second seed Gilles Simon, his first round-opponent at Wimbledon next week, in the final.

The Frenchman overcame Italy's Andreas Seppi 6-4 6-3 in one hour and 24 minutes.

"It's funny, funny to play the same guy in three days," said Lopez.

"But this is tennis and sometimes these things can happen. Final is a final. To win the tournament is not easy, so for the moment I take this one obviously."

British pair Colin Fleming and Jonathan Marray lost 3-6 6-3 10-8 to top seeds Alexander Peya and Bruno Soares in the final of the men's doubles.