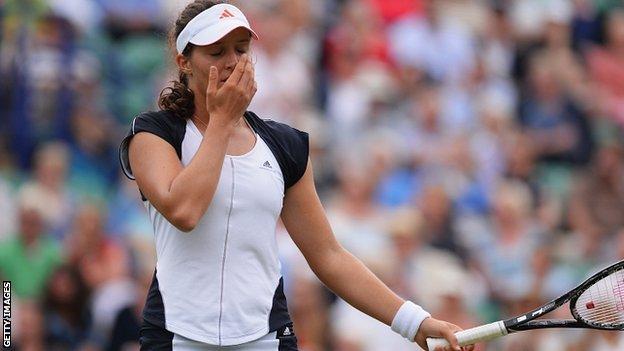 Caroline Wozniacki beat British number one Laura Robson for the second time in three weeks as the British singles challenge ended in Eastbourne.

The Dane, who knocked Robson out of the French Open, won 6-4 6-4 to reach the quarter-finals of the Aegon International.

The teenager more than held his own, extending the world number 17 to two tie-breaks and just short of two hours.

"He's 17 in the world and I got pretty close, so confidence-wise it's massive for me learning, going up the ranks of tennis. It shows where I can play, and I've just got to use this as a positive."

Robson, 19, put in a better performance than she had against Wozniacki in Paris, but the gap of three years and 28 ranking places was still evident.

After the first eight games were shared, the Briton's level dipped and two double-faults and a wayward forehand gave up the first break of serve.

Wozniacki took the set in 39 minutes, prompting Robson to request a courtside visit and some advice from new coach Miles Maclagan.

I've just got to sweep that one under the rug, get back on the practice court, work hard and make sure it's a good week next week

It did not bear fruit immediately, with Wozniacki breaking again at the start of the second when Robson fired a backhand long, but the Briton fought back to level at 2-2.

The Dane's solid defence ultimately proved too much for the more attacking but inconsistent game of Robson, who double-faulted and put a forehand in the net to lose serve at 4-4 once again.

The frustration clearly got to the player, who later apologised for swearing on court.

"I guess it was better than when I played her in Paris," said Robson. "I think I definitely had chances, and I got myself into a very good position in the points sometimes, and just couldn't finish it off.

"Today there were a lot of points where I set everything up and did all the right things and then just missed the last forehand, which isn't something that I usually do, because I usually feel very confident in that shot."

Watson, the British number two, only returned to action recently after two months out with glandular fever, but refused to blame that for her loss to Vesnina.

"It was a good day physically, just not so much mentally," said the Briton.

"I was in and out of focus. I thought it was a good opportunity wasted. I've just got to sweep that one under the rug, get back on the practice court, work hard and make sure it's a good week next week."

Baltachaadmitted it was "pretty gut-wrenching" to miss out on what would have been one of the best wins of her career against Kirilenko.

The 29-year-old Scot is currently ranked 185th as she makes her way back from a foot injury that almost ended her career.

On an unbeaten streak of six matches after winning the title in Nottingham last week, she held two break points at 3-3 in the decider but could not convert.

"I think eight weeks ago, if someone would have said to me that you're going to win Nottingham and then you're going to get a shot at Kirilenko in the second round of Eastbourne, I don't think I would have believed them," said Baltacha.

"I think what I have done in the last two, three months is actually quite amazing, really."