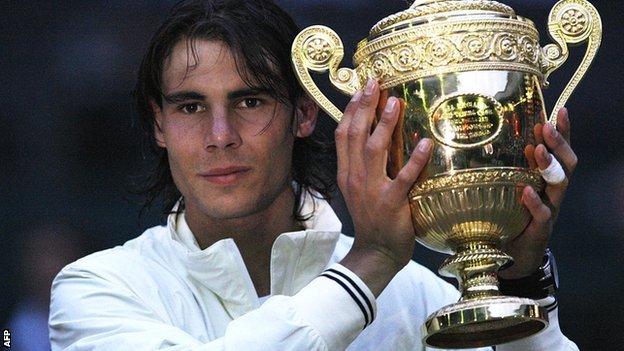 Rafael Nadal could face Andy Murray, Novak Djokovic or Roger Federer as early as the quarter-finals at Wimbledon after being confirmed as the fifth seed.

Two-time champion Nadal has slipped down the rankings after seven months out with a knee injury.

Djokovic tops the men's seedings ahead of Murray and Federer.

Serena Williams and Victoria Azarenka head the women's list, with the draw to be made on Friday.

Wimbledon applies its own formula to the men's seedings based on a player's grass-court form over the last two years.

Nadal has won 43 out of 45 matches since returning to action in February, and claimed his eighth French Open title in Paris earlier this month.

However, his shock second-round defeat by Lukas Rosol at last year's Wimbledon means he does not move up in the seedings from his world ranking of five.

Speaking in his BBC Sport column on Monday, Murray said: "As a player you can't get too obsessed about the draw.

"I'd sign up to be in the quarter-finals against Rafa tomorrow if someone offered me that.

"You could say if I get through that match, then the semi-final might not be as tough, but if you want to win the biggest tournaments you have to beat the best players in the world. It doesn't really matter where they are in the draw."

Eight men have a higher seeding than ranking, with Russia's Mikhail Youzhny the biggest mover from 28 in the ATP list to 20th seed at Wimbledon.

Wimbledon's seeding committee is able to alter the women's list "to produced a balanced draw" if necessary, but they have stuck with the WTA rankings.

Williams is currently on a career-best winning run of 31 matches and will be an overwhelming favourite to win her sixth title at the All England Club.

Svetlana Kuznetsova, who was seeded 26th, has withdrawn due to an abdominal strain, so Klara Zakopalova has been elevated into the top 32.