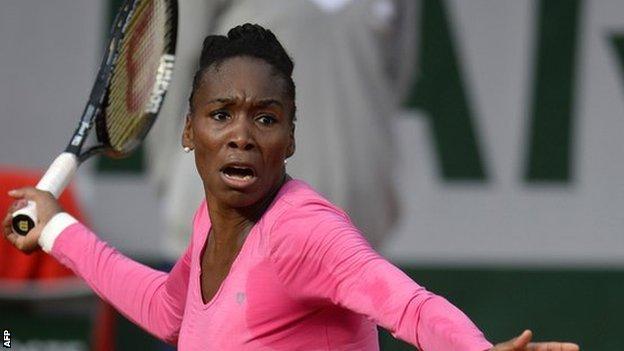 Five-time singles champion Venus Williams has been forced to pull out of Wimbledon, which begins on Monday, because of a back injury.

Williams, 33, struggled with the problem during the clay-court season and has not played since pulling out of the doubles at the French Open.

"I will not be able to participate in Wimbledon," she wrote on Facebook.

"I am extremely disappointed as I have always loved The Championships. I need to take time to let my back heal."

The American has become increasingly injury prone in recent years, as well as suffering with the auto-immune disease Sjogren's syndrome.

She had been enjoying a decent season until the back problem occurred, reaching two semi-finals on the WTA Tour and climbing back up to 34 in the rankings.

"I look forward to returning to the courts as soon as possible, with my goal being to return to Mylan World Team Tennis on 8 July in Washington DC," she added.

"Many thanks to my fans for the love and support and I will be seeing you very soon back on the courts."

Williams complained of back problems after her first round defeat at the French Open by Poland's Urszula Radwanska last month, then cited the injury when she and her sister Serena went on to pull out of the doubles competition.

The pair are the defending doubles champions at the All England Club, having claimed their fifth title with a 7-5 6-4 victory over the Czech Republic's Andrea Hlavackova and Lucie Hradecka.

World number one Serena Williams, 31, is seeking her sixth Wimbledon singles title and 17th Grand Slam in all.

The French Open champion is currently on a 31-match winning run, the longest single-season streak on the women's tour since Venus put together a 35-match run in 2000.