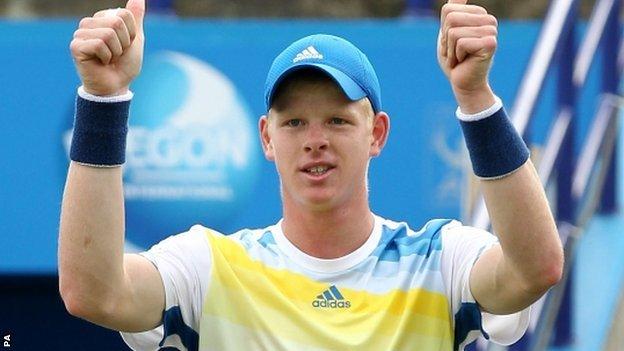 The 18-year-old took full advantage of his wildcard with a 6-4 6-4 win at the Aegon International.

"I'm just happy to get the win after getting the wildcard and this great opportunity," said Edmund, ranked 442.

Edmund will play Gilles Simon in round two, although the second seed picked up an ankle injury in training on Monday.

It's nice to know I can play at that level, but to do it week in, week out, is a different challenge and I want to be able to do that

The Briton, ranked 57th in the world, dropped serve early on but fought back to win in one hour and 26 minutes.

"It was tough and there were just two breaks after those first games," said the 21-year-old.

"I thought I served better, moved better. I had a lot more energy, I was quicker and my reactions were better today."

Watson only recently returned to action after two months out with glandular fever, and said she was relieved to get back to winning ways after losing early last week.

"In Birmingham I didn't play well at all, so I'm very motivated this week," she added.

"I've been mentally very up for this first-round match. I'm good friends with Varvara, and it's tough to play a friend, but I was looking forward to playing her for the first time and I thought I played well today."

Watson will face Elena Vesnina in the last 32 after the Russian upset seventh seed Ana Ivanovic, while British number one Laura Robson will begin her singles campaign against qualifier Yulia Beygelzimer on Tuesday.

I thought I served better, moved better. I had a lot more energy, I was quicker and my reactions were better today

Edmund only made his ATP debut at Queen's Club last week, losing in the first round, but he dominated his second contest at ATP level.

The US and French Open boy's doubles champion did not face a single break point and created seven against the Frenchman's heavy serve, converting twice and serving out to love.

"It's nice to get this win," said Edmund, who also has a wild card for Wimbledon. "I've been training hard after the loss at Queen's. I've been really focusing on the returning, which was just as well because he's got a big serve.

"When I get nervous I go into a little bit of a shell, from past experience, so I didn't think there was a need to be nervous because I wouldn't be able to play my game.

"I'd be walking off the court thinking I didn't put everything out there, which was the last thing I wanted, so I just went out there and focused on my game, and it worked out great.

"It's nice to know I can play at that level, but to do it week in, week out, is a different challenge and I want to be able to do that."