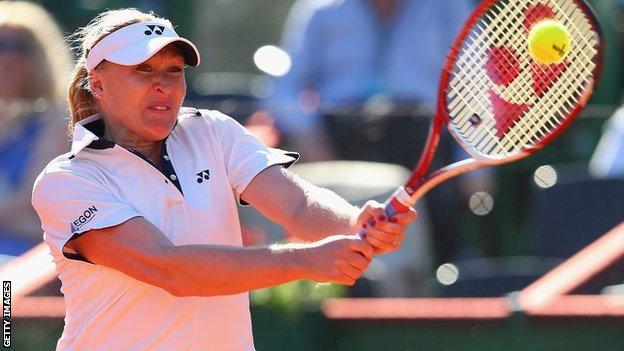 Sunday's victory was her first title since injuring an ankle last summer.

"One of the things I've picked up on is that I'm stronger," said the 29-year-old Ipswich-based Scot.

"I'm mentally stronger, my heart seems to be bigger and my stomach can tolerate much more now, which is exciting for me moving forward."

The former British number one finished the 2011 season in the world's top 50, but after a period of recovery she now finds herself down in 185 in the world and sixth in Britain.

She beat Tadeja Majeric of Slovenia 7-5 7-6 (9-7) to win in Nottingham in her seventh event since her return and now has a wildcard for Eastbourne this week and for Wimbledon, which begins on 24 June.

"To come back and play tennis like that, consistently in five matches this week, was such an amazing feeling - it is such a special win," she said.

"At this point of my comeback, a tough match like that is something I really needed - I needed to get pushed hard to find things out about myself.

"I am going to Eastbourne and Wimbledon with the best form I possibly can. I couldn't have had a better week getting ready for it."