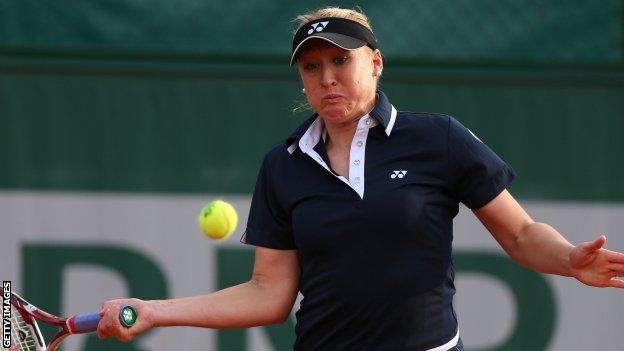 Elena Baltacha won her first title in two years with victory over world number 135 Tadeja Majeric of Slovenia at the ITF Nottingham Challenge.

The 29-year-old Briton won 7-5 7-6 (9-7) in her seventh tournament since returning from an injury that had kept her out since the London Olympics.

The British number six, who has slipped to 217 in the world, last won a title at the same event in 2011.

The Scot has been given wildcards for both Eastbourne and Wimbledon.

"This is the third time I've won a title here in Nottingham and I've never lost a final," said Baltacha. "It is a very, very special place - it is magic for me to be honest.

Elena Baltacha, Anne Keothavong, Johanna Konta, Tara Moore and Samantha Murray have all received places in the first round of Wimbledon

"It means absolutely everything to me - I was pretty much bawling my eyes out.

"To think I actually nearly retired after the Olympics nearly a year ago. To then have ankle surgery, then go through rehab - I can't believe how far I've come in such a short space of time."

She will join fellow Britons Laura Robson, Heather Watson and Johanna Konta in the main draw of the Aegon International in Eastbourne.

British number two Watson faces world number 28 Varvara Lepchenko of the United States in the first round on Monday.

It was the sixth title of Hantuchova's career and her first of the year.

Vekic, who is coached by Britain's David Felgate, was born two years before Hantuchova, 30, made her senior debut.