Andy Murray won his third Aegon Championships title and completed the perfect preparation for Wimbledon with victory over Marin Cilic at Queen's Club.

The Briton's serve was especially impressive as he won the rain-delayed final 5-7 7-5 6-3.

Victory capped a week that had proved an ideal return from the back injury that forced him to miss the French Open.

"It was a fabulous performance from Murray. A couple of little wobbles, getting a little irritated, but once he got his mind back on the game, his service games were immaculate. He did not let Cilic breathe, applying the pressure and it told. He could not have asked for a better week's preparation ahead of Wimbledon."

Murray, the world number two, will now turn his attention to a week of practice, before resuming his quest for a first Wimbledon title.

"I worked very hard in the time that I had off to try and get myself back in the best shape possible," he told BBC One.

"My team helped me a lot, they were patient with me and it's why I was able to come out and play so tough in the last couple of matches."

A second Monday final in three years had looked a possibility at Queen's, but after a rain delay of more than three hours and one aborted attempt to start, play began at 15:29 BST.

Murray made the first breakthrough with a whipped cross-court forehand in game two and served his way out of trouble facing three break points in the next, but from 4-1 the tide began to turn. 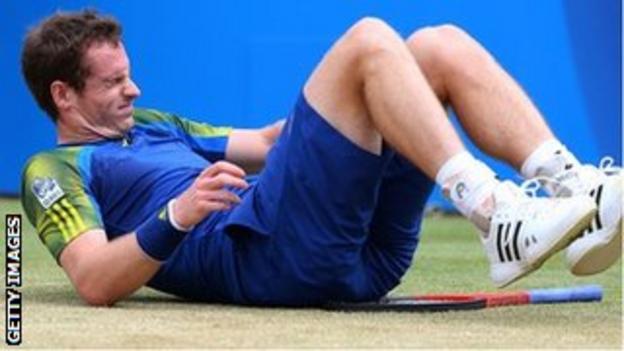 Two forehands dragged down into the net saw the Scot give up his advantage, and when he fell awkwardly while trying in vain to convert a break point in the next game, a shriek of pain rang around the Centre Court.

"The courts have taken a bit of a pounding this week - it's been extremely wet - and I just slipped," the 26-year-old told BBC Sport afterwards.

"I was a bit sore in the groin area, thankfully it wasn't too bad."

Murray dusted himself down and carried on, albeit rather cautiously, but the momentum was now with Cilic and the fifth seed broke again for 6-5, before fending off two break points to take the set.

The sun was finally shining as the second set began and Murray's fortunes brightened as his serve clicked into gear.

Cilic managed to cling on in the face of three break points in game five but, unable to make any headway against Murray's serve, the pressure was always quickly back upon him.

The Croat almost made it to the shoot-out of a tie-break but a brilliant lob set Murray on the way to a break in game 12, and Cilic netted a forehand on set point.

As he did in Saturday's semi-final win over Jo-Wilfried Tsonga, Murray accelerated towards the finish line with some sublime play in the final set.

It was Cilic errors that led to the decisive break in game four, but they came amid a string of wonderful shots from Murray, who followed a deft backhand volley with a searing pass down the line in game five.

The Scot narrowly missed out on breaking again at 4-1 and 5-2, when he netted a backhand on his first match point, but his serve remained impregnable.

After denying his opponent a single break point in sets two or three, he moved to match point again with a forehand winner and took the title when Cilic put a forehand into the net.

The game was organised to raise money for The Royal Marsden Cancer Charity.

The pro-celebrity tennis match raised more than £150,000 for the charity.

After winning the title, Murray went back on to court to play a pro-celebrity match in aid of the Royal Marsden Cancer Charity.

The Royal Marsden Centre has been treating Murray's friend, Davis Cup doubles player Ross Hutchins, who was diagnosed with Hodgkin's lymphoma in January.

A tweet from the Lawn Tennis Association on Sunday confirmed that Murray also donated his £73,000 winnings from the tournament to the charity.

Looking ahead to Wimbledon, Murray said: "The most important thing next week is just to make sure I keep improving the strength of my back, make sure there're no setbacks and just keep working hard on the rehab.

"Then, when Wimbledon comes round, it's all about how you play. It's very easy to say someone is in good form when they're not.

"A week is a long time in sport; anything can happen. You can lose a bit of confidence, you can gain confidence. You can pick up a niggle, you can feel 110%.

"But I'm in a good place and I'll just keep working hard the next week."