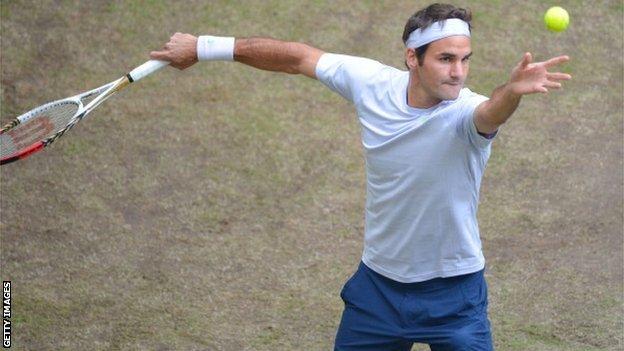 Five-time winner Roger Federer earned only the second 6-0 6-0 victory of his career as he thrashed Germany's Mischa Zverev to reach the Halle Open semis.

Federer, whose first such triumph was against Argentina's Gaston Gaudio in Shanghai in 2005, now meets Tommy Haas following his win over Gael Monfils.

"You never go on to court aiming for such a score. I'm surprised to have managed it today," said Federer.

It comes after his opening 6-3 6-3 victory over another German qualifier, world number 166 Cedrik-Marcel Stebe, in 67 minutes.

"I expect a completely different opponent (in Haas) on Saturday, (having played just two hours over two matches) could be an advantage as well as a disadvantage," said the reigning Wimbledon champion.

"I see it as above all the opportunity to play for a place in the final and then for the title."

In the other semi-final, Richard Gasquet will face either Germany's Philipp Kohlschreiber or Russian Mikhail Youzhny.