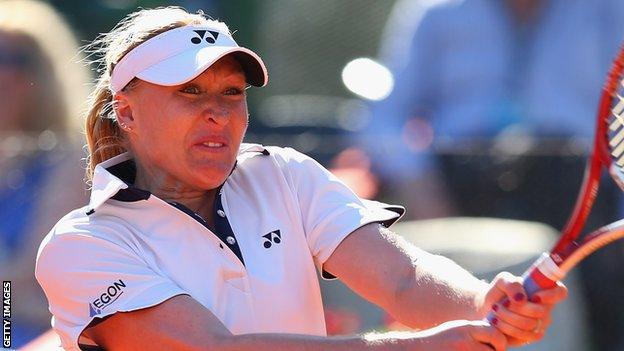 She plays Czech Barbora Zahlavova Strycova in the last eight on Friday.

"I had to stay strong in my head because we were on and off three times due to rain," she said.

"That is where experience really counts, and I feel I've got a good art for dealing with it.

"It was a pretty valuable situation to be in because I've not been put through that since I've come back. Now with Wimbledon approaching, where you know there is going to be rain, it proved to be good practice."

The Scot, who under went foot surgery in October, was ranked British number one for 132 weeks between December 2009 and June 2012.

Now ranked outside the world's top 200, she has been dogged by injuries in the past. She was diagnosed with a liver condition, primary sclerosing cholangitis, when aged 19 and underwent keyhole surgery on a prolapsed disc in her back in 2006.

During her absence, Laura Robson, 19, has taken the British number one mantle, ranked 37 in the world, and fellow Brit Heather Watson, 21, has risen to 54 in the world rankings.

"It is a good feeling," said Baltacha, who will be in action in Wimbledon, which starts on 24 June.

"Last week I couldn't piece my game together at all and now to do it back-to-back like that is quite good and hopefully I can do it for a third day."