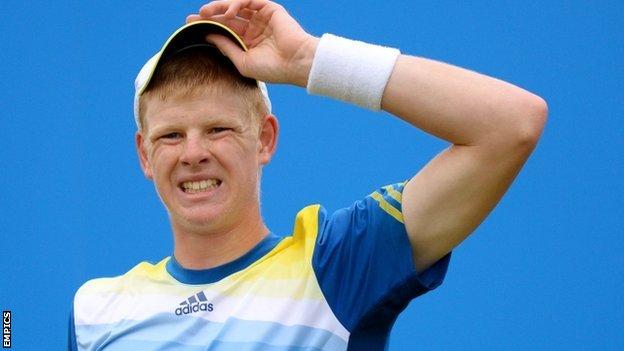 Teenager Kyle Edmund is one of seven British players awarded wildcards for Wimbledon, which starts on 24 June.

Edmund, 18, lost on his senior Tour debut at Queen's Club this week but won the boys' doubles at the French Open and is already ranked 444 in the world.

James Ward, 26, is also included but Dan Evans, 23, a shock winner at Queen's this week, misses out so far.

In the women's event, there are places for former British number ones Elena Baltacha and Anne Keothavong.

They join Johanna Konta, Tara Moore and Samantha Murray in the draw, along with Laura Robson and Heather Watson who, like men's world number two Andy Murray, qualify through their ranking.

There are four men's and two women's wildcard spots still to be announced. Evans currently has a wildcard into qualifying but could yet be awarded a place in the main draw.

The 23-year-old from Birmingham, currently ranked 277th, followed up his first-round win over world number 75 Guido Pella by upsetting world number 37 Jarkko Nieminen on Wednesday, to reach the third round at the Aegon Championships.

The LTA has a ranking cut-off of 250 for wildcards, but Ward's results at Queen's could see him meet the criteria, and earn a guaranteed £23,500 prize money for playing in the first round.

Australian Matthew Ebden, who won the mixed doubles at the Australian Open this year, and Nicolas Mahut, who lost a record 11-hour-and-five-minute match against American John Isner in 2010, have also been granted wildcard entries.

Edmund has also been granted a wildcard for the men's doubles, where he will partner compatriot Jamie Baker.