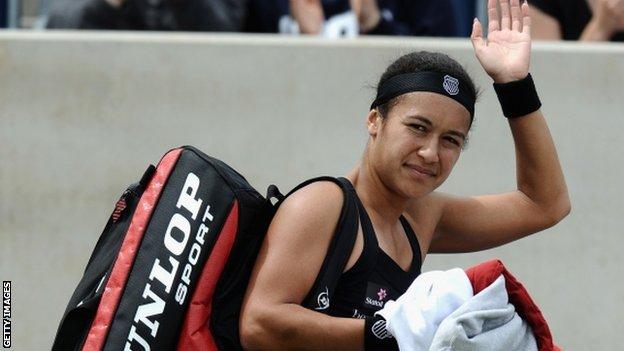 Laura Robson and Heather Watson suffered surprise second-round defeats at the Aegon Classic in Edgbaston as they both lost in straight sets.

Watson fell 6-4 6-3 in one hour and 11 minutes to Alla Kudryavtseva, a player ranked 118 places below the Briton.

I played well in my first match and I thought it was going to get even better but it was the total opposite.

Robson soon followed her compatriot, a weak second serve contributing to a 6-3 6-4 defeat by Daniela Hantuchova.

Konta's defeat was far less of a surprise, as the wildcard was competing against an opponent seeded 12th - although Mladenovic was made to battle past British number four Tara Moore in the first round.

British number two Watson was playing her third match since returning from a two-month lay-off with glandular fever.

"I made a lot of unforced errors and my serve was really awful but she was a much tougher opponent," said Watson.

"It was frustrating because I played well in my first match and I thought it was going to get even better but it was the total opposite.

"I felt fine - I just think I was a bit slow to the ball and slow thinking, which comes from not playing."

The 21-year-old did not pose a serious threat to Russian qualifier Kudryavtseva, losing the first set and quickly falling 5-2 behind in the second after being broken three times.

Watson did attempt a fightback and prevented her 25-year-old rival from serving out the match, but once again crumbled on her own serve.

The Briton performed below the standards she had set during her opening-round victory over Hungary's Melinda Czink and served poorly, winning 59% of points on her first serve and 42% of points on her second serve.

Indeed, the match ended with a double fault from Guernsey-born Watson which allowed Kudryavtseva to maintain an unbeaten record over the Briton with a second career victory over her.

Robson's faulty serve against former world number five Hantuchova also proved costly. The British number one won 92% of points on her first serve but merely 27% on her second serve.

"It takes time and a lot of hard work on the practice court. We have done a lot of work on my serve," said Robson.

"I was more focused on getting my first serve in rather than going for an ace. I definitely moved up to the ball a bit more."