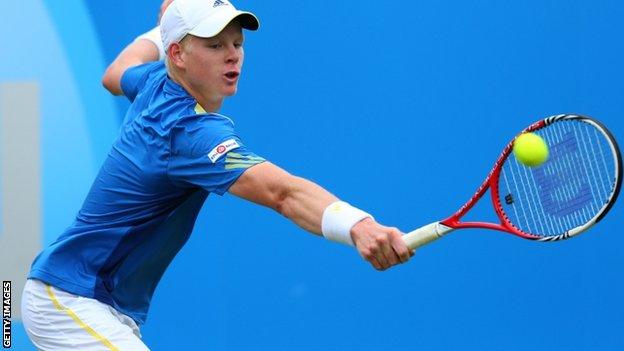 British wildcard Kyle Edmund was knocked out of the first round of the Aegon Championships with a straight sets defeat to Slovakia's Grega Zemlja.

The 18-year-old, winner of the boys' doubles title at the French Open, was making his debut on the senior Tour but is already ranked inside the top 500.

To play Andy Murray here at Queen's is not a good draw, but last year I played amazing and I won the match

Play starts at 11:00 BST on Wednesday and Murray and Mahut will be the third match on Centre Court.

Murray, the British number one, missed the French Open with a back injury and is yet to play competitively on grass this year.

His match on Wednesday against Mahut will be a repeat of last year's second-round tie when the Frenchman surprisingly ended Murray's title defence.

"To play Andy here at Queen's is not a good draw, but last year I played amazing and I won the match," Mahut said.

"So I hope this year it's going to be the same but everyone expects him to win here, to win Wimbledon, so he has a lot of pressure on his shoulders.

"It will be much easier for me to play tomorrow. This is his first match here and first match for a month. I think if he's playing here it means he's feeling 100% but still, it's the first round, especially on grass.

"I know he had some practice here, but still it's never easy to start a tournament, especially in the grass season."

The weather hampered the second day at Queen's with former champion Sam Querrey having to overcome four rain delays before beating Aljaz Bedene of Slovenia 7-6 (11-9) 5-7 7-6 (7-5).

The American saved a match point in the third set before securing the tie-breaker to progress.

Tennis authorities gave John Tomic a worldwide ban from watching his son's matches in person after he was charged by Spanish police for allegedly assaulting his son's French hitting partner, Thomas Drouet, before the Madrid Open at the start of May.

Tomic's father was told to stay away from the recent French Open and officials were issued instructions to bar him from entering Roland Garros.

Queen's chiefs upheld the ATP ban on giving John Tomic accreditation but agreed to let him pay for a spectator ticket for his son's first-round match and sit in the stands, on the proviso that he agreed to behave himself.

But world number eight Juan Martin del Potro, who like Murray missed the French Open but in his case because of a virus, saw off Belgium's Xavier Malisse 7-6 (7-5) 1-6 7-5 to reach the third round