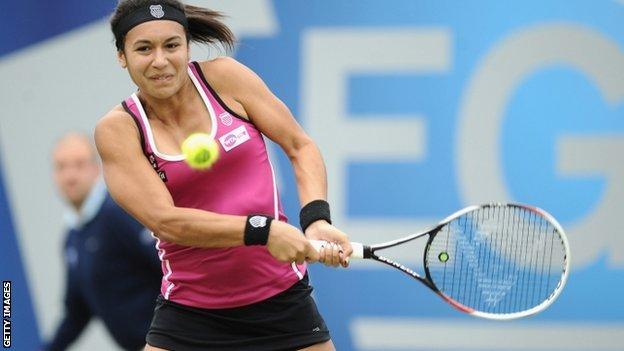 British number two Heather Watson moved into the second round of the Aegon Classic in Edgbaston with a 6-4 7-6 (7-0) win over Hungary's Melinda Czink.

The upgrading of the Aegon Classic's status can only be good news for a tournament which is a key part of the build-up to Wimbledon. The redevelopment of the Edgbaston club means the Classic will be a solid fixture for the foreseeable future.

And with three weeks between the French Open and Wimbledon in the future, the middle week of the three should be seen as the prize slot meaning more top-ranked players could be tempted to the West Midlands.

The 20-year-old British number four, who is ranked 194th in the world, came within two points of upsetting Mladenovic, the world number 39, before losing in two hours and 20 minutes.

Moore, who like Konta was handed a wildcard into the Birmingham event, took the first set and led 5-3 in the second-set tie-break before the 12th seed fought back.

Mladenovic will play Konta next after the 22-year-old world number 140 easily saw off Nara - who is six places above her in the world rankings - in one hour and 13 minutes.

Watson, playing only her second match since returning from a two-month lay-off with glandular fever, served impressively throughout her win over Czink, winning 92% of points off her first serve in the first set and 82% on her second.

The 14th seed's only blip came when she was broken when serving for the match at 5-4 in the second set but she recovered to wrap up her win convincingly in a tie-break.

Her next opponent is Russia's Alla Kudryavtseva, while British number one Laura Robson, who was handed a first-round bye, will face Daniela Hantuchova in the second round on Wednesday after the Slovak beat Casey Dellacqua 6-1 7-6 (7-1).