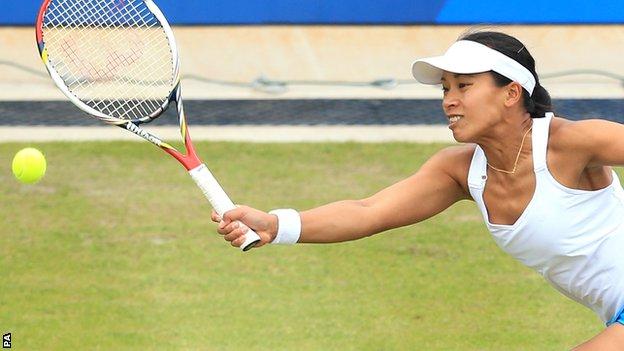 Anne Keothavong lost in the first round of the Aegon Classic in Birmingham to America's Alison Riske.

The British number five, handed a wildcard entry to the tournament, lost 7-5 6-2 to the 22-year-old qualifier.

Keothavong, 29, lost the first set despite securing an early break and had her own service broken six times as she lost in 92 minutes.

The upgrading of the Aegon Classic's status can only be good news for a tournament which is a key part of the build-up to Wimbledon. The redevelopment of the Edgbaston Club means the Classic will be a solid fixture for the foreseeable future.

And with there set to be three weeks between the French Open and Wimbledon in the future, the middle week of the three should be seen as the prize slot meaning more top-ranked players could be tempted to the West Midlands.

South, who like Keothavong was given a wildcard, lost 6-4 6-2 in 58 minutes to her 24-year-old opponent on the new Anne Jones Centre Court at Edgbaston's Priory Club.

The venue has undergone a £12m revamp, and earlier this year the tournament was upgraded to a World Tennis Association (WTA) Premier 600 event - meaning from 2014 it can offer more prize money and more ranking points to the players.

Defending champion Melanie Oudin, 21, is also out after losing in straight sets to Croatia's Ajla Tomljanovic, 20.

American Oudin, who won the 2012 title by beating Jelena Jankovic, could not come to terms with her opponent's strong serve in cold, windy conditions and lost 6-3 6-1.

Tomljanovic's second-round opponent will be 27-year-old number one seed Kirsten Flipkens, of Belgium, who received a bye into the second round.

British number one Laura Robson will also enter the tournament in round two as she is seeded in the top eight.

The 19-year-old seventh seed will play the winner of Casey Dellacqua's match with Daniela Hantuchova, while Robson's fellow Briton Heather Watson, 21, has a first-round meeting with Melinda Czink, 30, of Hungary.