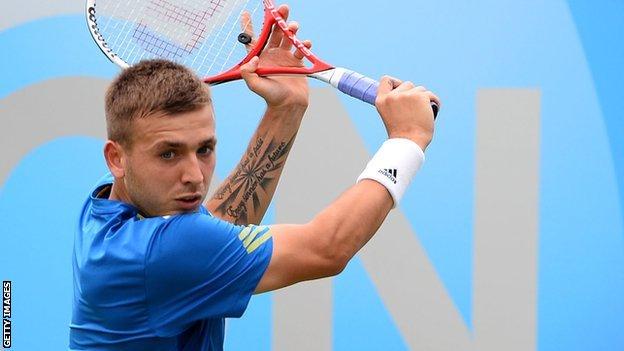 Britain's number five Dan Evans was a shock 6-3 6-1 winner over Argentina's Guido Pella in the first round of the Aegon Championships at Queen's Club.

Evans is ranked 277 in the world, 202 places below Pella, but was always in control against his erratic opponent.

"Dan Evans served well and used his forehand effectively. Apart from a couple of falls, he moved around a greasy court very confidently. He played above himself which is fantastic for British tennis.

"James Ward also played a good match, but the bottom line is that he should have closed out the match in the second set. He had the chances but he got tight on his forehand on the first point, then was too passive on the second.

"At this level you can't get away with that, you have to take the ball on but he hesitated for a second and that's all it takes. He will be very disappointed to end up losing."

Ward and Evans were Great Britain's Davis Cup heroes in April, winning matches against Dmitry Tursunov as Britain came back from 2-0 down to beat Russia 3-2, and they again produced some of their best tennis against higher-ranked opponents.

Birmingham-based Evans, who earned his wildcard by reaching the quarter-finals at the Aegon Trophy in Nottingham last week, rarely found his own serve under threat in the opening match on Centre Court and caused Pella constant problems with his powerful forehand.

Evans fell heavily in the second game but recovered to win seven games in a row from 3-3 in the first set and broke Pella's serve four times in total on his way to wrapping up victory in 57 minutes.

The 23-year-old will play Finland's 13th seed Jarkko Nieminen or Ryan Harrison, of the United States, in round two.

"I have felt good for a few weeks now and have been raring to go on grass," Evans said afterwards. "I got three games under my belt in Nottingham and came into the match feeling pretty confident."

Ward, ranked 215th, found himself in a far tougher battle with Dodig, the world number 54, seeing two set points come and go at 6-5 in the first set before eventually taking a tight tie-break.

The British number two had two match points at 5-3 in the second set but tightened up on his own serve and Dodig went on to level in another tie-break.

All the momentum appeared to be with the man from Zagreb but Ward, who returned superbly throughout, grabbed the initiative at the start of the deciding set to break and go 3-1 up.

Ward served for the match again at 5-4 but Dodig held his nerve to force a third tie-break, which he won convincingly, sealing victory in two hours and 40 minutes.

Dodig, 28, who plays defending champion Marin Cilic in round two, said: "I expected that match. James is playing great and he showed today he's a great player especially on a grass court where he feels very comfortable.

"It was tough for me, I was always down in the match. I kept fighting and in the end, somehow, I finished with the match which was important.

"It's tough, I played in Paris so I did not have so much time (to prepare on grass) but as soon as it was possible after finishing at the French Open I came here to try to prepare."

British number eight Ed Corrie, 25, lost in straight sets to Sergiy Stakhovsky. The Ukrainian clinched his place in the second round with a 6-4 7-6 (7-1) victory.

Corrie's fellow wildcard Kyle Edmund, who won the French Open boys' doubles title on Saturday, is the only other Briton still to play in the first round. World number two Andy Murray received a bye into round two after recovering from a back injury that kept him out of the French Open.