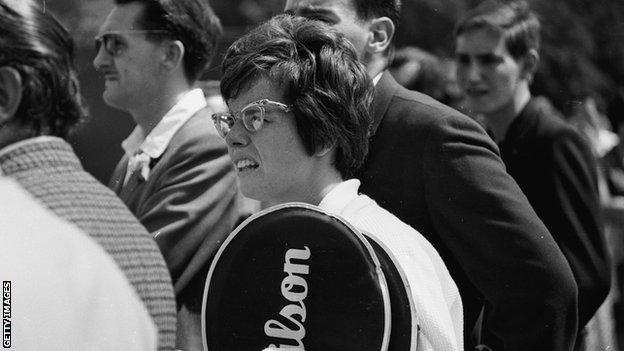 Wimbledon legend Billie Jean King has spoken of the loneliness she felt taking on friends in the tennis establishment - the "old boy network", she describes it - for the good for women's sport.

The six-time All England Club champion spoke to BBC Sport in a 5 live Sport Special "Billie Jean King and the Day Sport Changed Forever", on the 40th anniversary of the formation of the WTA (Women's Tennis Association).

King, now 69, told the programme that modern day tennis stars are "living the life we used to dream about".

"I really mean it," she said. "It's great to see a dream come true through the future generations."

Current world number two Maria Sharapova added: "What they did and their motivation and work helped us today and gives us a pretty good reason to look unselfishly to the future.

"What you do today will eventually affect players you don't even know, and I think that's a very unselfish and appropriate way to think about what you do on and off the court."

The tennis summer of 1973 arrived with plenty of unrest in the sport - for two reasons. It was a summer of discontent.

The men were unhappy about a suspension issued to Yugoslav player Nicki Pilic for not playing in the Davis Cup. Behind the scenes, tensions were running high, the threats and fall-outs were unpleasant and damaging, and Wimbledon was braced for a boycott.

As for the women, their complaints about sexism at tournaments and appalling comparative prize money had fallen mainly on deaf ears. So when Billie Jean King called a mass meeting of female players - 64 in total - in a room at The Gloucester Hotel in London on 20 June 1973, many expected another strike.

Instead, they emerged waving legal papers, triumphant and apprehensive in equal measure, announcing the formation of the Women's Tennis Association.

On the 5 live Sport Special, Billie Jean King, plus friends who were in the room, told the story of the day female athletes demanded to be taken seriously, the day which built the platform for women such as Serena Williams and Sharapova, plus superstars from other sports, to make a living from playing sport and become commercially successful.

"I got everyone in the room and told Betty Stove to lock the door," said King.

"I said: 'Don't let anybody out because I can't spend one more ounce of my life on this. If we can't make this happen today I'm finished.'"

Her friend and doubles partner Rosie Casals was by her side: "Nobody was going past Betty Stove, right? She's 6ft 4in. It was crazy. You know how crazy it is when you get a room full of women."

The legal documents were drawn up by King's husband at the time, Larry King.

He is named on the official minutes of that first meeting, a three-page A4 document in classic typewriter print, which has been seen by BBC Sport for the purposes of this documentary.

It starts in triumphant capital letters: "WELL, WE'VE FINALLY DONE IT!" And indeed they had.

The WTA, now a thriving professional tour with events in 33 countries and prize money of more than $100m (£64.3m), was born that day.

The programme traces the embryo of the WTA back to the landmark breakaway in 1970, when nine women signed one dollar contracts, much to the annoyance of national federations and the male-dominated tennis establishment.

And we discover how the entire reputation of women's tennis went on the line in the "Battle of the Sexes" later in 1973.