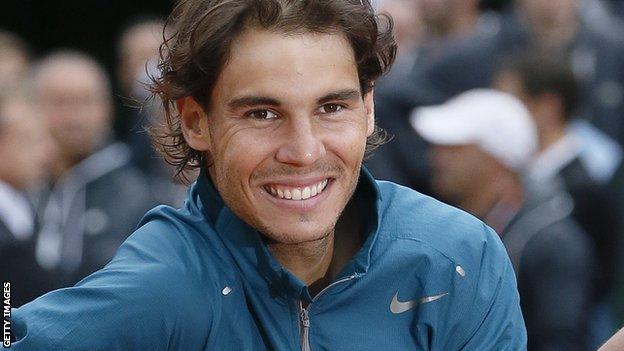 Rafael Nadal said he had feared winning an eighth French Open title would be "impossible" when a serious knee injury sidelined him for nearly eight months.

The 27-year-old beat David Ferrer 6-3 6-2 6-3 on Sunday to become the most successful player ever at Roland Garros, and the first man to win a Grand Slam singles tournament eight times.

"Novak Djokovic is realistically the only person who could have troubled Rafael Nadal in Paris, apart from someone else running really hot, like maybe Tomas Berdych or Jo-Wilfried Tsonga, but even Andy Murray would have struggled to trouble him.

"There is no reason why the Spaniard cannot win Wimbledon. On this form, I'd say he was favourite."

"I never like to compare years, but it's true that this year means something very special for me," said the Majorcan.

"Five months ago nobody in my team dreamed about a comeback like this because we thought it was going to be impossible.

"But here we are today, and that's really fantastic and incredible. So I'm very, very happy, just enjoying a lot all these emotions since I came back."

Nadal's comeback has been remarkable, with Roland Garros his seventh title in nine tournaments, and he leads the 2013 standings with 43 wins and just two defeats.

He admitted to still taking things "day by day" with the injury, but added: "The knee resisted a very tough battle against Djokovic the other day.

"Yesterday I didn't have a terrible feeling, so that's very positive news. Today I was able to compete with 100% another time, so that's fantastic."

Nadal's 12th Grand Slam title takes him past Bjorn Borg and Rod Laver to joint third on the all-time list.

"[Winning] eight times here is a lot," he said. "I never thought about that. But, sure, I will keep practising with the same passion and intensity to bring my tennis to the highest level possible."

At Wimbledon, Nadal will look to get closer to Roger Federer's total of 17 majors.

But he admitted that his decision to pull out of next week's warm-up event in Halle might hurt his chances at the All England Club.

"I will check everything after here," said Nadal, who will drop to five in the world rankings on Monday despite his victory.

"I will check all my body and I really hope to be ready for Wimbledon.

"I am going to try to arrive in good shape to Wimbledon, and if not I am going to look at the rest of the season, because I'm in a good position even if I don't play a good Wimbledon.

"That doesn't mean I am not going to try, because I am going to try my 100% to be ready for there and to play good tennis there."

Ferrer, 31, was playing in his first Grand Slam final against a man he had only beaten four times in 23 meetings.

He managed to peg back the champion in the first set and had chances to break in the third, but ultimately went down in three sets.

"To beat Rafael in clay court, I need to play more aggressive," said Ferrer. "I need to finish the points at the net and to play my best tennis to beat him.