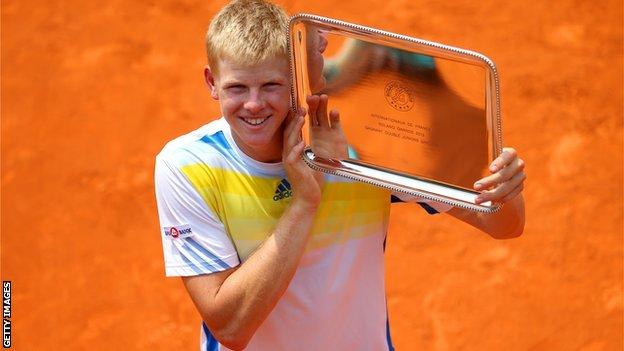 Kyle Edmund became the first British winner at the French Open since 1982 as he claimed the boys' doubles title.

He has a wildcard to compete in the men's singles at Queen's next week.

There was concern for Edmund and Ferreira Silva as their fifth-seeded opponents pegged them back from 4-0 to 4-3 in the second set.

But the duo stopped the rot and the Briton, who was born in South Africa but lives in East Yorkshire, served out the victory, clinching the title with a fine forehand.

The last Briton to win at Roland Garros was John Lloyd 31 years ago - he lifted the mixed doubles trophy with Australia's Wendy Turnbull.

Edmund said: "I feel very happy that we were able to win. It's a nice feeling to win at any level but after our win at the US Open it's great to be able to do it again at Roland Garros. With a quarter-final in the singles and a win in the doubles, it feels like a good week.

"I always like to play on clay and I've always wanted to have success on clay, but for me and my partner to be able to follow up our win in New York with victory here on a different surface just shows how well we play together.

"We play similar game styles - we both like to serve big and hit big forehands as much as possible. We have a simple game plan and we stick to it and execute it well."