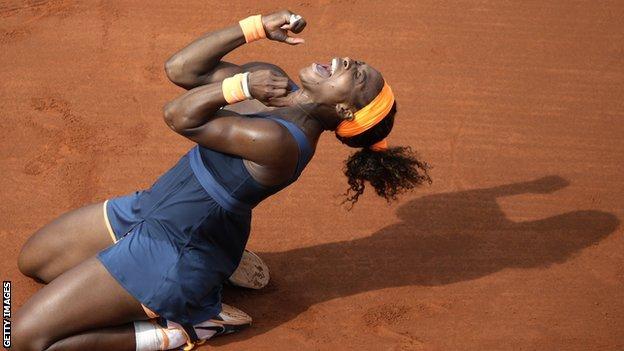 The American, 31, was pushed at times but took control midway through the first set, winning 6-4 6-4 in one hour and 46 minutes.

Williams has now claimed 16 Grand Slam singles titles, moving her to within two of Martina Navratilova and Chris Evert, who have 18 each.

And with an unbeaten run that stands at 31 matches, she will be strongly favoured to add to that tally at Wimbledon next month.

We were hoping it wouldn't be too one-sided. Maria played really well. Her serve was really good, but Serena was that little bit better and managed to get a couple of breaks.

I'm in awe of Serena's strength, her ability, her agility and the way she competes.

"Today, when I won, I was trying to win the French Open; I wasn't trying to get to number 16,"

"I think it's really special. I feel like I definitely want to continue my journey."

Sharapova had come into Saturday's final promising to "try something different" after failing to beat Williams in their last 12 matches, stretching back to 2004.

Key to the Russian's hopes was defending a serve that has been plagued by double faults in recent times.

At 0-40 in the opening game, things already looked bleak for Sharapova, but she dug in and fired down an ace and one terrific second serve as she saw off four break points.

The second seed took that momentum into the following game to break the mighty Williams serve, and looked well set in the next at 40-15 - before Williams sparked into life.

A heavy forehand winner helped her back into the game and when she thumped away a smash on break point, the American let out a "come on!" that was the equal of Sharapova's early efforts.

Four games in a row put Williams in command at 4-2, but Sharapova showed the grit that has taken her to four Grand Slam titles as she battled her way back to 4-4 in some fierce baseline exchanges.

With the pressure on, Williams raised her intensity still further and produced the kind of hitting that even Sharapova cannot live with, forcing the Russian into a forehand error in game nine before serving out the set after 51 minutes.

That was five minutes longer than Sara Errani had managed to delay Williams and Sharapova continued to cling on gamely.

She saved five break points in a gripping first game of the second set but, unable to trouble the American's serve, she found herself under pressure again moments later.

Williams proved just how much she has improved her movement on clay as she slid out wide for one defensive backhand on the way to breaking in game three, and she would not relinquish the advantage.

The 15,000 spectators in the main Chatrier stadium cheered Sharapova as she held serve from 30-30 with defeat looming, but she was not about to be given a reprieve by her opponent.

Williams demonstrated once again that her serve is the best shot in the game, firing down an ace to secure the title and dropping to her knees in celebration.

Sharapova said: "She played a great match. She played strong, she played deep, served really good; served better than I did. She took her chances."