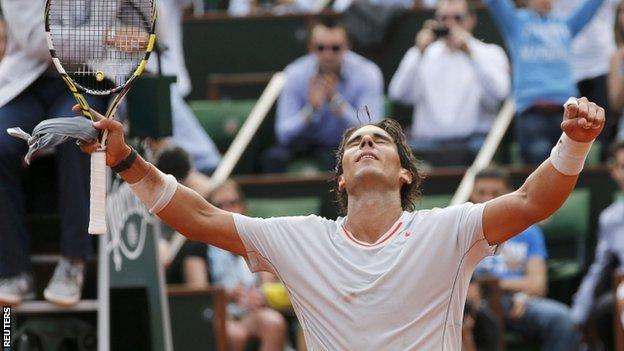 Rafael Nadal and Novak Djokovic will meet in a much-anticipated French Open semi-final after both won their quarter-finals in straight sets.

The two tournament favourites, and last year's finalists, will face each other on Friday, with Jo-Wilfried Tsonga playing David Ferrer in the other semi-final.

Djokovic and Nadal will meet before the final because the Spaniard is seeded third as he continues to make his way back from a seven-month break for a knee injury.

Nadal said: "I know that I play against the best player of the world. I know that he's having great results for a long time.

The Serb said: "I look forward to the match. You know, it's not the first time I'm playing him. We have played over 30 times. I'm sure that we know each other's games really well.

"We are in good form. This is the biggest match-up of our Roland Garros 2013 campaign for both me and him."

Wawrinka, 28, had reached the quarter-finals with a dramatic five-set win over Richard Gasquet, and he looked to pay the price for that exertion against Nadal.

A loose forehand saw the Swiss drop serve in the opening game and two more errors off that side gave Nadal a double break at 4-1, prompting Wawrinka to smash his racquet and hurl it across the court as the set slipped away.

Nadal suffered one brief scare when he was broken back midway through the second set, but his opponent could not capitalise.

A woeful smash contributed to him handing the advantage straight back and another forehand error gave the 27-year-old a two-set lead.

At the same time, a more absorbing contest was unfolding on Court Suzanne Lenglen as Djokovic battled to subdue Haas.

The German's run to the last eight at the age of 35 has been one of the stories of the tournament, but like Wawrinka he had spent a lot of time on court to reach the quarter-finals.

A single break of serve gave Djokovic the opening set but the second was in the balance until the Serb won a brilliant point of 24 strokes at 5-5 in the tie-break.

The 26-year-old worked the opening superbly before drilling a backhand into the corner that brought a rueful thumbs up from Haas.

Djokovic twice let leads slip in the third as his forehand began to misfire, before a third break at 5-5 saw him serve it out at the second time of asking after two hours and 13 minutes.

Over on Chatrier meanwhile, Nadal made the decisive move in the third set with a running forehand that left Wawrinka rooted to the spot, and eased home in one hour and 56 minutes.